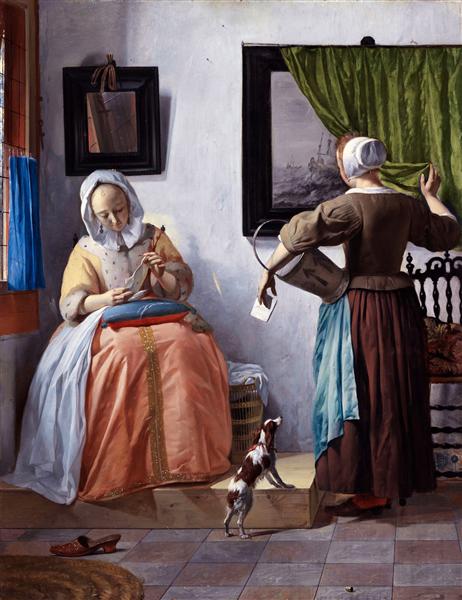 The origin of the term Baroque is a bit ambiguous. Many scholars think it was derived from the Portuguese barrocco, meaning an imperfect or irregularly shaped pearl. And some, like the philosopher Jean-Jacques Rousseau thought it was derived from the Italian barocco, a term used to describe an obstacle in formal logic in the medieval period. In growing usage, the term originally contained negative connotations, the artwork within its cadre viewed as bizarre and sometimes ostentatious. But in 1888 Heinrich Wölfflin's Renaissance und Barock (1888), the term was officially used as a simple descriptive to denote the distinct artistic style.

Rather than having a single moment of inception, the Baroque period brought together a number of innovative developments in the late 1500s as it was informed by the different and rival painting styles of Caravaggio, the Bolognese School led by Annibale Carracci, and the architecture of Giacomo Della Porta. A deciding factor in the formation of the movement's intensity and scope was the patronage of the Catholic Church's Counter-Reformation.

Following the 1527 Sack of Rome, and in efforts to oppose the growth of Protestantism, the Counter-Reformation sought to re-establish the Church's authority. In 1545, Pope Paul III convoked the first Council of Trent, which gathered church dignitaries and theologians to establish doctrine and to condemn contemporary heresies. The Council held 25 sessions under the leadership of Pope Paul III and his successors, Pope Julius III and Pope Pius IV, until 1563. Visual art and architecture became part of the reform campaign, as the Council established guidelines for art that included depicting religious subjects like the Immaculate Conception, and the Assumption of the Virgin that were exclusive to Catholic dogma, in order to reposition the church's importance in the public eye. However, these guidelines also meant that artists could be called to task if any church official deemed their works depicting religious subjects as offensive. One of the earliest examples occurred when Venetian Renaissance painter Paolo Veronese was brought before the Inquisition to defend his Last Supper (1573), for which he was accused of including "buffoons, drunken Germans, dwarfs, and other such scurrilities." When the piece was renamed The Feast in the House of Levi, alluding to a Gospel setting where sinners were present, the work was considered acceptable.

The Protestant Reformation was opposed to the use of images for religious worship, but the Counter-Reformation argued that such art had a didactic purpose and called for a new kind of visual representation that was simple but dramatic, realistic in depiction, and clear in the narrative. The movement's leaders professed that art should be easily understood and strongly felt by common people with the effect of encouraging piety and an awe-inspiring sense of the church. While the church and its dignitaries had been notable art patrons since the Gothic era, a new program of patronage was intentionally spurred throughout Europe. New religious orders that were part of the reform movement like the Jesuits, the Capuchins, and the Discalced Carmelites, were officially encouraged to become important patrons of art. This new Baroque style spread throughout Europe, primarily supported by the Catholic Church led by the Pope in Rome and Catholic rulers in Italy, France, Spain, and Flanders. It was further disseminated by powerful religious orders through their extensive network of monasteries and convents.

Marked by grandeur and an emphasis on movement and drama, the High Baroque began around 1625 and lasted until around 1700. Gian Lorenzo Bernini led and dominated the era, defining the Baroque style in sculpture. His patron, Cardinal Scipione Borghese, was one of the wealthiest and most powerful men in Rome, and Bernini's early sculptures were created for the Cardinal's Borghese Palace. Works like his The Rape of Proserpina (1621-22) and his Apollo and Daphne (1622-1625) emphasized dramatic realism, intense emotion, and movement.

Spanish Baroque was noted for its distinctive style, as a somber and, even sometimes, gloomy mood prevailed in Spanish culture. The Eighty Year War (1568-1648) where the Spanish sought unsuccessfully to maintain control of the Netherlands, and the Anglo-Spanish War (1585-1604) where the Spanish Armada, attempting to invade England, was defeated, drained Spanish finances and created an economic crisis. At the same time, Catholicism was informed by the severity of the Inquisition. In architecture the grandeur and wealth of the church was emphasized, as the Jesuits, an order noted for both its intellectual advocacy for the Counter-Reformation and its Christian proselytization, evolved an extreme use of ornament to accentuate religious glory. In contrast to the architectural emphasis on Catholic splendor, Spanish Baroque painting emphasized the limitations and suffering of human existence. It was noted for its focus on realism based upon precise observation and was less interested in theatrical effects than a compelling sense of human drama. Caravaggio was an early influence on artists like Francisco Ribalta and Jusepe Ribera, though most Spanish artists took chiaroscuro and tenebrism as a departure point and evolved their own style. Ribera's later work emphasized a layer of silver tones overlaid with warm golden tones as seen in his The Holy Family with St. Catherine (1648).

Bartolomé Esteban Murillo developed the estilo vaporiso, or vaporous style, that used a delicate palette, softened contours, and a veiling effect of silver or golden light. His works were both religious subjects like The Immaculate Conception (1678), and genre paintings, where he often depicted street people, as in The Young Beggar (1645). His work was very popular, due to its elegance and sentimentality, and he co-founded the Seville Academy of Fine Art in 1660. After his death, Juan de Valdes Leal became the leading painter of Seville, though his work focused on the dramatic such as The End of Worldly Glory (1672), an allegory of death, which made his work a kind of early precursor to Romanticism. Francisco de Zurbaran was dubbed "the Spanish Caravaggio" for his religious subjects like The House of Nazareth (1630), though his compositions were more severe and restrained and often focused on a solitary ascetic figure.

The leading painter of the Spanish Baroque was Diego Velázquez whose work included a number of subjects: genre works like Old Woman Frying Eggs (1618); historical paintings of contemporary events like The Surrender of Breda (1634-1634); religious works like Christ Crucified (1632); noted portraits like Portrait of Innocent X (1650) and Las Meninas (1656); and one of the few Spanish nudes, The Rokeby Venus (1644-1648), a subject which was discouraged in Catholic Spain. While he began by employing tenebrism, he evolved his own masterful technique, which employed a relatively simple color palette but emphasized tonalities and varied brushwork.

Architecture was the dominant expression of the French Baroque. Called Classicism in France, it rejected the ornate in favor of geometric proportion and less elaborate facades. In painting, French artists also moved toward a more classical restraint. Claude Lorrain and Nicolas Poussin were the most important French painters, though both worked in Rome. Lorrain's work emphasized landscape and the effects of light, and his subjects, whether religious or classical themes, were simply the occasion of the work but not its focus. While Poussin began painting in a Baroque style, by his mid-thirties he had begun to develop his own style, as works like his Landscape with Orpheus and Eurydice (1650-1651) conveyed calm rationality that became influential in the later development of Neoclassicism.

Other French artists, most notably Georges de la Tour, were influenced by Caravaggio's tenebrism but turned away from dramatic action and effects. Painting primarily religious subjects, he innovatively explored nocturnal light, employing geometric compositions and simplified forms to convey a calm and thoughtful spirituality. La Tour's work was influential in his time, as King Louis XIII, Henry II of Lorraine, and Cardinal Richelieu were patrons of his work. Genre painters like the Le Nain brothers also innovatively applied the Baroque style. Louis, Antoine, and Mathieu Le Nain collaborated on most of their works, and their genre scenes emphasized the realism of everyday labor, as seen in their The Blacksmith at His Forge (c. 1639) and Peasants' Meal (1642).

Painting was the distinctive component of the Flemish Baroque, and its particular character originated in historical and cultural forces. In 1585, Spanish Catholic forces recaptured Antwerp in Flanders, or modern-day Belgium, and the Catholic region was split off from the Protestant Dutch Republic. As a result, Flemish artists painted both Counter-Reformation religious subjects and landscapes, still lifes, and genre works that still drew upon the Northern European tradition.

Peter Paul Rubens led the development of Flemish Baroque painting. His High Baroque style, known for its rich color, sensual exuberance, and movement informed both his religious painting as in Descent from the Cross (1614) and his non-religious subjects like the Judgment of Paris (1636). His female nudes of mythological and Biblical women were particularly renowned and influential, as they combined sensuality with a complexity of allegory and allusion. Rubens' most noted student was Anthony van Dyck who became famous later primarily for his portraits, marked by a courtly elegance. In 1630 he was appointed court painter to the Princess of Orange in 1630 and, due to royal connections, became the painter for the English court and was knighted by Charles I, the King of England, in 1632. Flemish artists also painted genre scenes, and the best known were Adriaen Brouwer, Jacob Jordaens, and David Teniers the Younger.

Dutch Baroque, or the Dutch Golden Age was the only example of the Baroque style employed in a Protestant area, and, as a result, took a very different approach in both architecture and painting. The Dutch Golden Age began around 1648 with the end of the Thirty Years War, as the Dutch Republic, which had seceded from Spain in 1588, finally achieved independence. In the decades that followed the Republic, fueled by its domination of world trade, became an economic powerhouse with a rising middle class. Dutch Baroque architecture primarily drew upon the works of the Venetian Renaissance architect Andrea Palladio (often referred to as Dutch Palladianism), while retaining some Gothic elements to create a restrained monumental style. Dutch painting emphasized scenes of everyday life, secular subjects, and pioneered developments in landscape, still life, and genre painting. Religious subjects were most often depicted in printmaking to illustrate Biblical texts. At the same time, a number of Dutch leading artists, including Rembrandt, Johannes Vermeer, and Salomon van Ruysdael painted in the Baroque style, employing chiaroscuro and tenebrism. This can be seen in Rembrandt's Night Watch (1642).

The Baroque period came to an end with the emergence of Rococo in Paris around 1720. Some scholars refer to Rococo as "Late Baroque," yet it took on a very light-hearted and entertaining style bound to courtly life. Nonetheless, Baroque artists continued to be influential in the Rococo period, as Rubens influenced Jean-Antoine Watteau, François Boucher, and Jean-Honoré Fragonard.

As the Rococo period was followed by the Neoclassical style within fifty years many Baroque artists became obscure and overlooked. Rubens and Rembrandt were rediscovered in the 1800s, as Rubens influenced the Romantics Théodore Géricault, and Eugène Delacroix, Rembrandt influenced the Impressionists and Post-Impressionists, and Velázquez was a significant influence upon Édouard Manet, Pablo Picasso, and Francis Bacon.