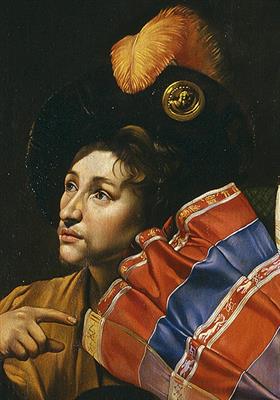 The Adoration of the Magi (detail, supposed self portrait) - Juan Bautista Maíno


His father was a merchant who sold Milanese fabrics and his mother was a Portuguese noblewoman. Both were at the service of Ana de Mendoza, Princess of Eboli, who was also the Duchess of Pastrana. Some historians believe that he trained with El Greco, but no documentary evidence has been found. It is known for certain that he spent the years 1600 to 1608 in Italy, where he became familiar with, and was influenced by, the works of Caravaggio and his students Orazio Gentileschi, Guido Reni and Annibale Carracci. When he returned to Pastrana, he revealed those influences in a "Trinity", painted for the side altar at the Monasterio de Concepcionistas Franciscanas [es].


In March of 1611, he moved to Toledo and, the following year, painted an "Altarpiece of the Four Days of Easter" for the Dominicans, which is now at the Museo del Prado. It is, perhaps, his best known work. Also notable are canvases depicting the "Adoration of the Magi" and the "Adoration of the Shepherds".


In June of 1613, he entered the Dominican Order and took up residence at the Monastery of San Pedro Mártir. This reduced his artistic activity, although he created other versions of the "Adoration of the Shepherds", one of which is at the Hermitage in Saint Petersburg. Another may be seen at the Meadows Museum in Dallas.


King Philip III called him to his Court in 1620, to teach drawing to his son, the future King Philip IV. At that time, Maíno became a sponsor of the young Diego Velázquez; choosing him, in a contest, to paint an "Expulsion of the Moors", which helped establish him at court. That painting did not survive the disastrous fire at the Royal Alcázar of Madrid in 1734.


He died at the Colegio y convento de Santo Tomás in Madrid. Friar Juan Rizi may have been one of his students there.