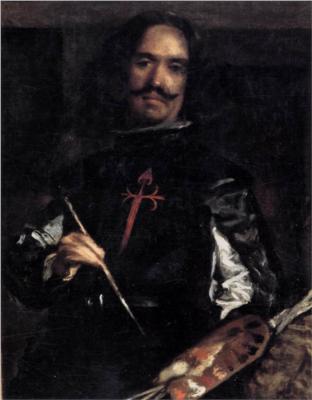 Diego Rodríguez de Silva y Velázquez (Spanish: [ˈdjeɣo roˈðɾiɣeθ ðe ˈsilβa i βeˈlaθkeθ]; baptized on June 6, 1599 – August 6, 1660) was a Spanish painter, the leading artist in the court of King Philip IV, and one of the most important painters of the Spanish Golden Age. He was an individualistic artist of the contemporary Baroque period. In addition to numerous renditions of scenes of historical and cultural significance, he painted scores of portraits of the Spanish royal family, other notable European figures, and commoners, culminating in the production of his masterpiece Las Meninas (1656).

From the first quarter of the nineteenth century, Velázquez's artwork was a model for the realist and impressionist painters, in particular Édouard Manet. Since that time, famous modern artists, including Pablo Picasso, Salvador Dalí and Francis Bacon, have paid tribute to Velázquez by recreating several of his most famous works.

Velázquez was born in Seville, Spain, the first child of João Rodrigues de Silva and Jerónima Velázquez, and was baptized at the church of St. Peter in Seville on Sunday, June 6, 1599. The christening most likely occurred a few days or weeks after his birth. His paternal grandparents, Diogo da Silva and Maria Rodrigues, had moved to Seville from their native Portugal decades earlier. When Velázquez was offered knighthood in 1658, he claimed descent from the lesser nobility in order to qualify; in fact, however, his grandparents were tradespeople, and possibly Jewish conversos.

Velázquez was educated by his parents to fear God and, intended for a learned profession, received good training in languages and philosophy. Influenced by many artists, he showed an early gift for art; consequently, he began to study under Francisco de Herrera, a vigorous painter who disregarded the Italian influence of the early Seville school. Velázquez remained with him for one year. It was probably from Herrera that he learned to use brushes with long bristles.

After leaving Herrera's studio when he was 12 years old, Velázquez began to serve as an apprentice under Francisco Pacheco, an artist and teacher in Seville. Though considered a generally dull, undistinguished painter, Pacheco sometimes expressed a simple, direct realism in contradiction to the style of Raphael that he was taught. Velázquez remained in Pacheco's school for five years, studying proportion and perspective and witnessing the trends in the literary and artistic circles of Seville.

By the early 1620s, his position and reputation were assured in Seville. On April 23, 1618, Velázquez married Juana Pacheco (June 1, 1602 – August 10, 1660), the daughter of his teacher. She bore him two daughters—his only known family. The elder, Francisca de Silva Velázquez y Pacheco (1619–1658), married painter Juan Bautista Martínez del Mazo at the Church of Santiago in Madrid on August 21, 1633; the younger, Ignacia de Silva Velázquez y Pacheco, born in 1621, died in infancy.

Velázquez produced notable works during this time. Known for his compositions of amusing genre scenes, also called bodegones, such as Old Woman Frying Eggs, his sacred subjects include Adoración de los Reyes (1619, The Adoration of the Magi) and Jesús y los peregrinos de Emaús (1626, Christ and the Pilgrims of Emmaus), both of which begin to express his more pointed and careful realism.