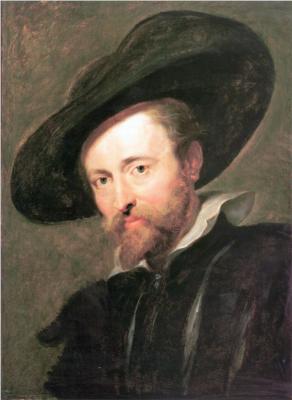 A Flemish painter, Peter Paul Rubens’ Baroque style emphasized movement, sensuality and color. Although he was raised as a Catholic and painted Counter-Reformation pieces f or the church, he was born into a Protestant family. In 1568, his mother and father fled the Spanish Netherlands due to persecution of Protestants. Jan Rubens, Peter Paul’s father, began a sordid affair with the woman to whom he was court advisor, Anna of Saxony. His father was imprisoned for the affair and two years after his death, Peter and his family returned to Antwerp, in the Netherlands, and beginning at the age of twelve was raised as a Catholic. He began his artistic apprenticeship at age fourteen and completed his education in 1598, when he became an independent master painter.

During his career, Rubens traveled to Italy and Spain, and was influenced by the great works of Titian, Veronese, and Tintoretto, as well as Leonardo da Vinci, Raphael, and Michelangelo. He returned to Antwerp upon his mother’s death in 1608, and remained there as a court painter for the Archduke of Austria, and received special privileges as both a painter and a court diplomat. In 1610, Rubens moved into the house that would become his studio, where he taught students and created most of his paintings. This house has now become the Rubenshius Museum. His most famous students, friends and collaborators were Frans Snyders, Anthony van Dyck, and Jan Brueghel the Elder.

Throughout his life, he was relied upon not only as a master painter, but one whose diplomat talents were required by many a court. Between 1627 and 1630, he traveled between England and Spain, in attempts to create a truce between the two nations. He was knighted by both the Spanish monarch, Philip V, and the English King, Charles I. Cambridge University also awarded him an honorary Master’s Degree.

Four years after the death of his first wife, Rubens, who was 53 years old at the time, was married to a 16 year old named Helene Fourment, whom he used as model in many of his later paintings. His fondness for the full figured woman has since spurned the term “Rubenesque,” which is still used in Dutch to refer to such women.

In addition to running a large studio in Antwerp that produced paintings popular with nobility and art collectors throughout Europe, Rubens was a classically educated humanist scholar and diplomat who was knighted by both Philip IV of Spain and Charles I of England. Rubens was a prolific artist. The catalogue of his works by Michael Jaffé lists 1,403 pieces, excluding numerous copies made in his workshop.

His commissioned works were mostly "history paintings", which included religious and mythological subjects, and hunt scenes. He painted portraits, especially of friends, and self-portraits, and in later life painted several landscapes. Rubens designed tapestries and prints, as well as his own house. He also oversaw the ephemeral decorations of the royal entry into Antwerp by the Cardinal-Infante Ferdinand in 1635.

His drawings are predominantly very forceful but not overly detailed. He also made great use of oil sketches as preparatory studies. He was one of the last major artists to make consistent use of wooden panels as a support medium, even for very large works, but he used canvas as well, especially when the work needed to be sent a long distance. For altarpieces he sometimes painted on slate to reduce reflection problems.

Rubens was born in the city of Siegen to Jan Rubens and Maria Pypelincks. He was named in honour of Saint Peter and Saint Paul, because he was born on their solemnity. His father, a Calvinist, and mother fled Antwerp for Cologne in 1568, after increased religious turmoil and persecution of Protestants during the rule of the Habsburg Netherlands by the Duke of Alba.

Jan Rubens became the legal adviser (and lover) of Anna of Saxony, the second wife of William I of Orange, and settled at her court in Siegen in 1570, fathering her daughter Christine who was born in 1571.

Following Jan Rubens' imprisonment for the affair, Peter Paul Rubens was born in 1577. The family returned to Cologne the next year. In 1589, two years after his father's death, Rubens moved with his mother Maria Pypelincks to Antwerp, where he was raised as a Catholic.

Religion figured prominently in much of his work, and Rubens later became one of the leading voices of the Catholic Counter-Reformation style of painting (he had said "My passion comes from the heavens, not from earthly musings").

In Antwerp, Rubens received a Renaissance humanist education, studying Latin and classical literature. By fourteen he began his artistic apprenticeship with Tobias Verhaeght. Subsequently, he studied under two of the city's leading painters of the time, the late Mannerist artists Adam van Noort and Otto van Veen. Much of his earliest training involved copying earlier artists' works, such as woodcuts by Hans Holbein the Younger and Marcantonio Raimondi's engravings after Raphael. Rubens completed his education in 1598, at which time he entered the Guild of St. Luke as an independent master.