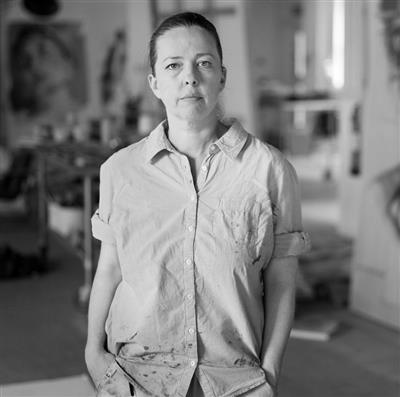 
Jenny Saville RA (born 7 May 1970) is a contemporary British painter associated with the Young British Artists. She is known for her large-scale painted depictions of nude women. Saville works and lives in Oxford, England.


Saville was born on 7 May 1970 in Cambridge, England. Saville went to the Lilley and Stone School (now The Grove School Specialist Science College) in Newark, Nottinghamshire, for her secondary education, later gaining her degree at Glasgow School of Art (1988–1992), and was then awarded a six-month scholarship to the University of Cincinnati where she states that she saw "Lots of big women. Big white flesh in shorts and T-shirts. It was good to see because they had the physicality that I was interested in" - a physicality that she partially credits to Pablo Picasso, an artist that she sees as a painter that made subjects as if "they were solidly there...not fleeting.".


At the end of Saville's postgraduate education, the leading British art collector, Charles Saatchi, purchased her senior show. He offered the artist an 18-month contract, supporting her while she created new works to be exhibited in the Saatchi Gallery in London. The collection, Young British Artists III, exhibited in 1994 with Saville's self-portrait, Plan, as the signature piece. Rising quickly to critical and public recognition in part through Saatchi's patronage, Saville has been noted for creating art through the use of a classical standard—figure painting. Although Saville's chosen method is traditional, she has found a way to reinvent figure painting and regain its position in the context of art history. Known primarily for her large-scale paintings of nude women, Saville has also emerged as a Young British Artist (YBA). Much of her work features distorted flesh, high-caliber brush strokes and patches of oil color, while others reveal the surgeon's mark of a plastic surgery operation. In 1994, Saville spent many hours observing plastic surgery operations in New York City.


Saville has dedicated her career to traditional figurative oil painting. Her painterly style has been compared to that of Lucian Freud and Rubens. Her paintings are usually much larger than life size. They are strongly pigmented and give a highly sensual impression of the surface of the skin as well as the mass of the body. She sometimes adds marks onto the body, such as white "target" rings.


Since her debut in 1992, Saville's focus has remained on the female body, slightly deviating into subjects with "floating or indeterminate gender," painting large scale paintings of transgender people. Her published sketches and documents include surgical photographs of liposuction, trauma victims, deformity correction, disease states and transgender patients.


Saville's work will be exhibited at the 2018 Edinburgh Art Festival at the Scottish National Gallery of Modern Art exhibit NOW.


Stare (2005) was used for the cover of the Manics' 2009 album Journal for Plague Lovers. The top four UK supermarkets stocked the CD in a plain slipcase, after the cover was deemed "inappropriate". The band's James Dean Bradfield said the decision was "utterly bizarre", and commented: