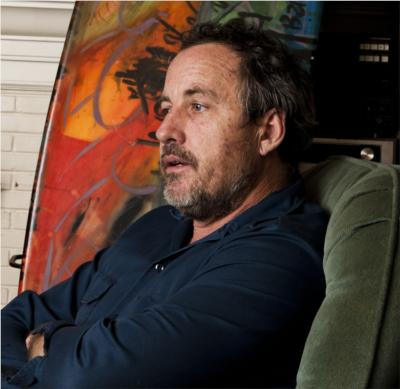 David Hinnebusch is an American contemporary artist. His work lives in the world of thinkers Marshall McLuhan, Douglas Hofstadter (esp. Metamagical Themas), Osho, Malcolm Gladwell, and English comedy writing. The subject matter of his work is autobiographical and centers around his Los Angeles-based punk-rock and film-making careers.

David Hinnebusch, Malibu/ Santa Monica/ Venice Beach, California painter. Born in American steel town Pittsburgh Pennsylvania, moved to Musoma, Tanzania, East Africa at age one, then to Los Angeles, California at age 4 ...spent an additional year in Nairobi, Kenya at age 8 where without television, spent time writing a novel about orphan children going on fantastic adventures. Back in the states, television (especially the CBS Children's Film Festival with Kukla, Fran and Ollie) the ocean, Dungeons and Dragons (cir. 1977) and then punk rock and all that is bad about music all led to me painting in 1990 full time. Selling first three paintings at DAA ruined me a bit.

take the "tour" on website- old punk rocker started painting in the 1990s favorite movie Withnail and I, TV Fawlty, music the Beatles and Crass,

Work Quote 2006:
Interested in continuing studio work. Pablum material is self- portrait and guilty pleasure material. I absolutely love painting and making art but I also enjoy being alive and trying to help … Read More

The Santa Monica College of Design, Art and Architecture existed in Santa Monica, California from 1990 until 2000. The director of the school was Joan Abrahamson who is a MacArthur Fellow and the founder and president of the Jefferson Institute. The school hosted an all professional faculty of working artists, designers and architects, among them Alison Saar, Laddie John Dill, George Herms, Jill Giegerich, Lisa Adams, Peter Alexander, Robert Wilhite and others.