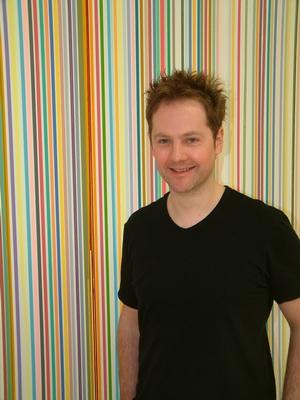 Ian Davenport was born in Sidcup, and studied art at the Northwich College of Art and Design in Cheshire before going to Goldsmiths College from where he graduated in 1988. Some of his classmates included Damien Hirst, Michael Landy, Gary Hume and Sarah Lucas. In the same year, he exhibited in the Damien Hirst-curated Freeze exhibition which first brought together many of the later-to-be Young British Artists. Davenport's first solo show was in 1990 and in the same year he was included in the British Art Show. In 1991, he was nominated for the annual Turner Prize.

Many of Davenport's works are made by pouring paint onto a tilted surface and letting gravity spread the paint over the surface. He has usually worked on medium density fibreboard rather than canvas, and most often employs household gloss paint, meaning the viewer can see their own reflection in the work. He has made a number of diptychs and triptychs as well as single works.

For the Days Like These exhibition at Tate Britain in 2003, Davenport made a thirteen-metre high mural by dripping lines of differently coloured paint down the wall from a syringe. In September 2006 he unveiled his largest public commission to date on Southwark Bridge entitled Poured Lines: Southwark. He painted the West End Wall of the University of Oxford Department of Biochemistry.

Stylistic comparisons have been made between Davenport's work and those of Bridget Riley, Helen Frankenthaler and Callum Innes.

The first monograph dedicated to Ian Davenport was published in 2014, launched with a show 'Colourfall' at Waddington Custot Galleries.

Davenport's works have been exhibited globally, first in London in the Swansea Arts Workshop and currently on exhibit at the Art Plural Gallery in Singapore. Davenport lives and works in London.