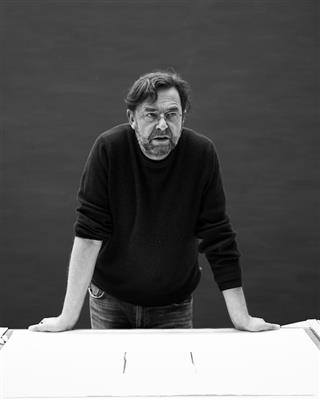 Callum Innes (born 1962) is a Scottish abstract painter, a former Turner Prize nominee and winner of the Jerwood Painting Prize.

Callum Innes was born in Edinburgh. He studied at Gray's School of Art (1980–84) and graduated from Edinburgh College of Art in 1985.

Innes began exhibiting in the mid-to-late 1980s and in 1992 had two major exhibitions in public galleries, at the ICA, London, and the Scottish National Gallery of Modern Art, Edinburgh. Since then he has had numerous solo exhibitions throughout Britain, Europe, North America, New Zealand and Asia.

A substantial selection of his best-known series, the "Exposed" paintings, was exhibited in 1998 at the Ikon Gallery, Birmingham, England, and at the Kunsthalle Bern the following year. "From Memory", a major exhibition of Callum Innes' work over the past 15 years, was shown at The Fruitmarket Gallery, Edinburgh in 2006, and toured to Modern Art Oxford, and the Museum of Contemporary Art, Sydney. Innes' first major London exhibition was hosted in 1990 at Frith Street Gallery who continue to represent him. Innes had a substantial solo exhibition of new work at Ingleby Gallery for the Edinburgh Art Festival (2009). "At One Remove", featured at Sean Kelly Gallery New York (2010), as did an exhibition entitled water|colour, featuring 101 of the artist's watercolours paired with text by Irish writer Colm Tóibín. Callum Innes held his first major solo exhibition in Asia at Edouard Malingue Gallery in Hong Kong in 2012. Other recent solo exhibitions include i8 Gallery, Reykjavik, Iceland (2013); Whitworth Gallery, Manchester (2013); Liminal, Sean Kelly Gallery, New York (2013) and Watercolours, Galerie Tschudi (2013–14).

In 1995 he was shortlisted for the Turner Prize which was won by Damien Hirst. In 1998 Innes won the NatWest Art Prize and in 2002 he won the Jerwood Painting Prize and the Artisti Invitati Al Premio Internazionale.