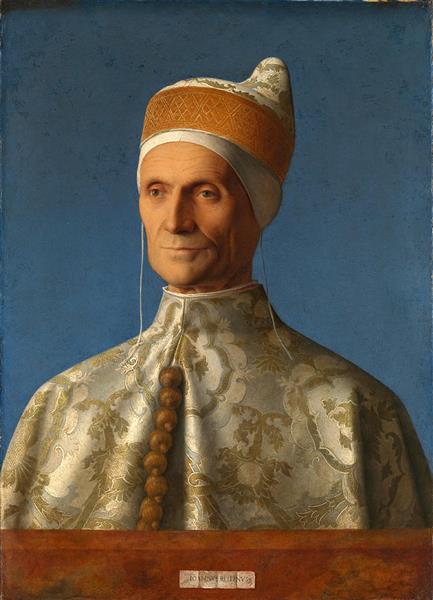 The Portrait of Doge Leonardo Loredan is a painting by the Italian Renaissance master Giovanni Bellini, dating from 1501. It is on display in the National Gallery in London. It portrays Leonardo Loredan, Doge of Venice from 1501 to 1521, in his ceremonial garments with the corno worn over a linen cap, and is signed IOANNES BELLINVS on a cartellino.

Leonardo Loredan was the Doge of Venice from 1501–21. In Bellini's painting he is shown wearing his robes of state. The hat and ornate buttons are part of his official wardrobe. The sitter can be identified as Doge Loredan by comparing his features with portrait medals of him. The shape of the hat comes from the hood of a doublet. It is called a corno ducale and was a type of ducal hat, worn over a linen cap. The painting is part of a Venetian tradition of painting formal portraits of the City's rulers dressed in state robes. It is painted in the style of the sculpted portrait busts popular at the time. These were often inspired by Roman sculpture. Bellini signed his name in its Latin form, IOANNES BELLINVS on the cartellino, or "small paper", on the parapet. He was famous for his portraiture and helped make this art form especially popular in Venice.

John Pope-Hennessy described Bellini as "by far the greatest fifteenth-century official portraitist", adding that "the tendency towards ideality that impairs his private portraits here stood him in good stead, and enabled him to codify, with unwavering conviction, the official personality".

The painting would initially have been in Venice and was probably looted when Napoleon conquered the city. It was bought by William Thomas Beckford in 1807 for thirteen guineas (£13 13s). He sold it to the National Gallery in 1844 for £630.