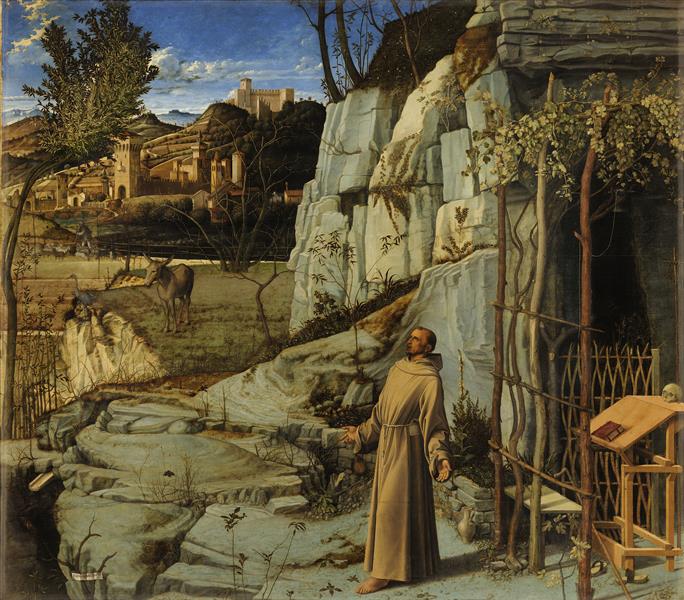 The Ecstasy of St. Francis (or St. Francis in the Desert) is a painting by Italian Renaissance master Giovanni Bellini, started in 1475 and completed around 1480. It is in the Frick Collection in New York City, displayed prominently in what was the living room of Henry Clay Frick, an American industrialist, financier, and art patron. The painting is oil on panel and shows the influence of Andrea Mantegna, who was the painter's brother-in-law. It is signed IOANNES BELLINVS on a small, creased tag visible in the lower left corner. The painting is now in the Frick Collection and it is considered to be one of its finest assets.

The painting portrays the Italian 12th-century saint Francis of Assisi in an Italian landscape, stepping out in the sun from his cave. Francis lived under poor conditions in the beginning of his sainthood and used to participate in isolated spiritual retreats at monasteries but this painting is most probably a symbolic representation of the saint. The animals in the picture may represent the saint's love for nature and animals. The Ecstasy of St. Francis is depicting Francis in a religious ecstasy, perhaps receiving the stigmata, as Millard Meiss suggested though, when Francis is receiving the sigmata, usually an angel, a seraph or a crucifix emitting rays is depicted as well. Alternatively, he may be praying or perhaps singing his Canticle of the Sun, as Richard Turner has argued.

Whatever the specific moment portrayed may be, the representation is a fresh one and does not follow any of the established iconographic motifs.

In the left middle-ground is a donkey which can be interpreted as a symbol of humility and patience. In the lower right corner, on a rustic reading table, is a skull, representing mortality, welcomed in the last stanza of the saint's Canticle. The cave may relate Francis to Saint Jerome, who also lived in a cave or cell. The stream in the left middle-ground symbolizes Moses and the great spring, while the barren tree in the centre of the painting represents the Burning Bush. The saint has left his wooden pattens behind and stands barefoot like Moses. In the distance rises the still-empty Heavenly Jerusalem. The overall composition is thought to be a meditation of St. Francis on the creation of the world as related in the Book of Genesis. Though it has been cut down, it has otherwise been well-cared for since its creation.