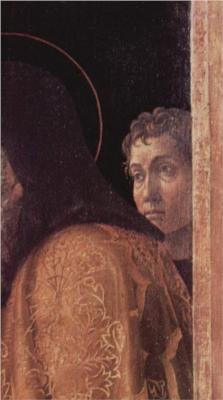 Presentation of Christ in the temple, detail (Self-Portrait) - Andrea Mantegna

Andrea Mantegna (Italian: [anˈdrɛːa manˈteɲɲa]; c. 1431 – September 13, 1506) was an Italian painter, a student of Roman archeology, and son-in-law of Jacopo Bellini. Like other artists of the time, Mantegna experimented with perspective, e.g. by lowering the horizon in order to create a sense of greater monumentality. His flinty, metallic landscapes and somewhat stony figures give evidence of a fundamentally sculptural approach to painting. He also led a workshop that was the leading producer of prints in Venice before 1500.

Mantegna was born in Isola di Carturo, Republic of Venice close to Padua (now Italy), second son of a carpenter, Biagio. At the age of eleven he became the apprentice of Francesco Squarcione, Paduan painter. Squarcione, whose original vocation was tailoring, appears to have had a remarkable enthusiasm for ancient art, and a faculty for acting. Like his famous compatriot Petrarca, Squarcione was something of a fanatic for ancient Rome: he traveled in Italy, and perhaps Greece, amassing antique statues, reliefs, vases, etc., forming a collection of such works, then making drawings from them himself, and throwing open his stores for others to study. All the while, he continued undertaking works on commission for which his pupils no less than himself were made available.

As many as 137 painters and pictorial students passed through Squarcione's school, which had been established towards 1440 and which became famous all over Italy. Padua was attractive for artists coming not only from Veneto but also from Tuscany, such as Paolo Uccello, Filippo Lippi and Donatello. Mantegna's early career was shaped indeed by impressions of Florentine works. At the time, Mantegna was said to be a favorite pupil. Squarcione taught him Latin and instructed him to study fragments of Roman sculpture. The master also preferred forced perspective, the lingering results of which may account for some of Mantegna's later innovations. However, at the age of seventeen, Mantegna separated himself from Squarcione. He later claimed that Squarcione had profited from his work without paying the rights.

His first work, now lost, was an altarpiece for the church of Santa Sofia in 1448. The same year Mantegna was called, together with Nicolò Pizolo, to work with a large group of painters entrusted with the decoration of the Ovetari Chapel in the transept of the church of the Eremitani. It is probable, however, that before this time some of the pupils of Squarcione, including Mantegna, had already begun the series of frescoes in the chapel of S. Cristoforo, in the church of Sant'Agostino degli Eremitani, today considered his masterpiece. After a series of coincidences, Mantegna finished most of the work alone, though Ansuino, who collaborated with Mantegna in the Ovetari Chapel, brought his style in the Forlì school of painting. The now censorious Squarcione carped about the earlier works of this series, illustrating the life of St James; he said the figures were like men of stone, and had better have been colored stone-color at once.

This series was almost entirely lost in the 1944 allied bombings of Padua. The most dramatic work of the fresco cycle was the work set in the worm's-eye view perspective, St. James Led to His Execution. (For an example of Mantegna's use of a lowered view point, see the image at right of Saints Peter and Paul; though much less dramatic in its perspective than the St. James picture, the San Zeno altarpiece was done shortly after the St. James cycle was finished, and uses many of the same techniques, including the classicizing architectural structure.)