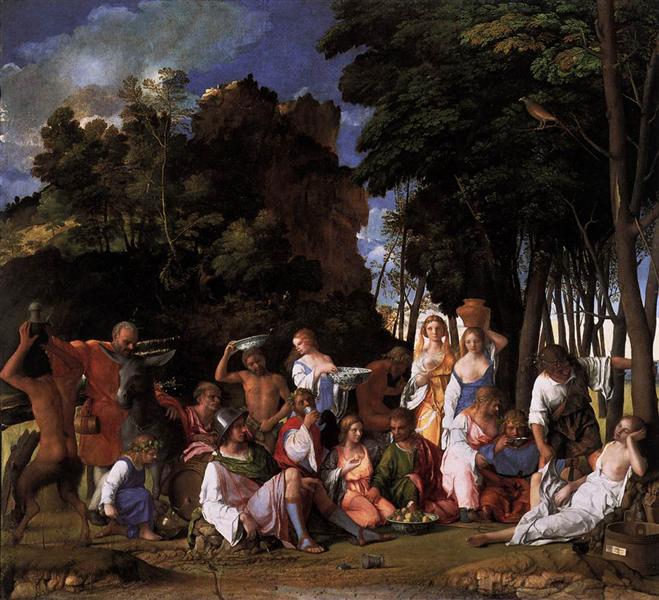 The Feast of the Gods

The Feast of the Gods is an oil painting by Giovanni Bellini, with substantial additions by Titian, who added all the landscape to the left and centre. It is one of a cycle of paintings on mythological subjects produced for Alfonso I d'Este, the Duke of Ferrara, for his camerino d'alabastro ('chamber of alabaster') in the Castello Estense, Ferrara. It is one of the few mythological pictures by Bellini, who completed it in 1514. After his death soon afterwards (1516), Titian probably modified the landscape on the left to match it to his The Bacchanal of the Andrians (1518–1523), also in Alfonso's camerino. A more thorough reworking in about 1529 added more landscape, adding the mountain behind the figures.

The scene depicted conflates two episodes in Ovid's Fasti. Priapus, on the right, is attempting to seduce the sleeping nymph Lotis, but is prevented from success by the bray of Silenus' donkey. Around are the drunken Gods: Jupiter has an eagle next to him, Poseidon is caressing Cybele and Ceres, while Hermes is languidly lying on a barrel. The boy with vine-leaves on his head is an unusually young depiction of Bacchus. It is thought that Bellini initially painted the figures as mortals, following a misleading translation of Ovid (the so-called Ovidio volgarizzato), and had to re-paint them with the attributes of the Olympian gods.

The Feast of the Gods (Italian: Il festino degli dei) is an oil painting by the Italian Renaissance master Giovanni Bellini, with substantial additions to the landscape in stages by Dosso Dossi and Titian, who added all the landscape to the left and centre. It is one of the few mythological pictures by the Venetian artist. Completed in 1514, it was his last major work. It is now in the National Gallery of Art in Washington D.C., which calls it "one of the greatest Renaissance paintings in the United States".

The painting is the first major depiction of the subject of the "Feast of the Gods" in Renaissance art, which was to remain in currency until the end of Northern Mannerism over a century later. It has several similarities to another, much less sophisticated, treatment of the 1490s by the Florentine artist Bartolomeo di Giovanni, now in the Louvre.

The painting is signed by an inscription on the fictive paper attached to the wooden tub at lower right: "joannes bellinus venus / p MDXIIIII" ("Giovanni Bellini of Venice, painted 1514"), and his payment that year is recorded. Based on a narrative by Ovid, it is the earliest of a cycle of paintings, all major works, on mythological subjects produced for Alfonso, I d'Este, the Duke of Ferrara, for his camerino d'alabastro ('chamber of alabaster') in the Castello Estense, Ferrara. The subjects had been chosen by 1511, by the Renaissance humanist Mario Equicola, then working for the Duke's sister Isabella d'Este, and instructions apparently including some sketches were sent to the artists. Later commissions were four large Titians (one now lost), and ten smaller works by Dosso Dossi, probably placed above them. The three surviving Titians painted for the room are Bacchus and Ariadne (National Gallery, London), The Bacchanal of the Andrians and The Worship of Venus (both Prado, Madrid).

It had been suggested that Bellini made a preliminary set of alterations before or soon after 1514 to make the painting more compatible with the original Latin of Ovid, having previously been working from an Italian Ovidio volgarizzato version, and that at this point Bellini changed most of the characters to gods rather than people from Thebes, giving them attributes and lower necklines for the women. But this view was based on a misunderstanding of the early x-rays taken in 1956. It is now thought that the figures are as originally painted by Bellini. Bellini died in 1516, soon after completing the painting, and some years later Dosso Dossi and perhaps Titian modified the landscape on the left to match it to his The Bacchanal of the Andrians (1518–1523), also in Alfonso's Camerino, adding the rocky hill behind the figures and the brighter foliage on a tree at the right. A more thorough reworking by Titian in about 1529 added more landscape, overpainting the earlier changes. But all the work on the figures remains Bellini's. A pheasant in a tree on the right, above Priapus, may have been painted by Alfonso himself, an amateur painter.