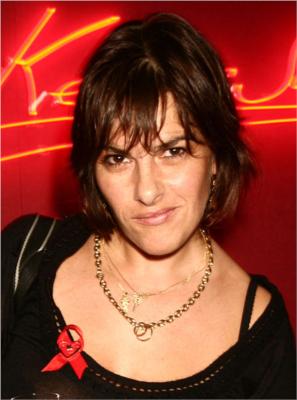 Tracey Emin, CBE, RA (/ˈɛmɪn/; born 3 July 1963) is an English contemporary artist known for her autobiographical and confessional artwork. Emin produces work in a variety of media including drawing, painting, sculpture, film, photography, neon text and sewn appliqué. Once the "enfant terrible" of the Young British Artists in the 1980s, Tracey Emin is now a Royal Academician of the Royal Academy of Arts.

In 1997, her work Everyone I Have Ever Slept With 1963–1995, a tent appliquéd with the names of everyone the artist had ever shared a bed with was shown at Charles Saatchi's Sensation exhibition held at the Royal Academy in London. The same year, she gained considerable media exposure when she swore repeatedly in a state of drunkenness on a live discussion programme called The Death of Painting on British television.

In 1999, Emin had her first solo exhibition in the United States at Lehmann Maupin Gallery, entitled Every Part of Me's Bleeding. Later that year, she was a Turner Prize nominee and exhibited My Bed – a readymade installation, consisting of her own unmade dirty bed, in which she had spent several weeks drinking, smoking, eating, sleeping and having sexual intercourse while undergoing a period of severe emotional flux. The artwork featured used condoms and blood-stained underwear.

Emin is also a panellist and speaker: she has lectured at the Victoria and Albert Museum in London, the Art Gallery of New South Wales in Sydney (2010), the Royal Academy of Arts (2008), and the Tate Britain in London (2005) about the links between creativity and autobiography, and the role of subjectivity and personal histories in constructing art. Emin's covers a variety of different media, including needlework and sculpture, drawing, video and installation, photography and painting.

In December 2011, she was appointed Professor of Drawing at the Royal Academy; with Fiona Rae, she is one of the first two female professors since the Academy was founded in 1768.

Emin was born in Croydon, a district of South London, to an English mother of Romanichal descent, and brought up in Margate with her twin brother, Paul.

Emin and her second cousin Meral Hussein-Ece, Baroness Hussein-Ece's paternal great-grandfather, Abdullah, was reportedly a Sudanese slave in the Ottoman Empire. Via her father, she is of Turkish Cypriot descent. Emin suffered an unreported rape at the age of 13 while living in Margate, citing assaults in the area as "what happened to a lot of girls." Her work has been analysed within the context of early adolescent and childhood abuse, as well as sexual assault.

She studied fashion at Medway College of Design (now the University for the Creative Arts) (1980–82),. There she met expelled student Billy Childish and was associated with The Medway Poets. Emin and Childish were a couple until 1987, during which time she was the administrator for his small press, Hangman Books, which published Childish's confessional poetry. In 1984 she studied printing at Maidstone Art College (now the University for the Creative Arts). which she has described as one of the most influential periods of her life.