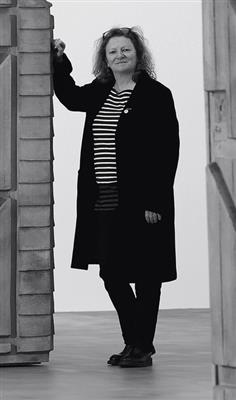 Rachel Whiteread, CBE (born 20 April 1963) is an English artist who primarily produces sculptures, which typically take the form of casts. She was the first woman to win the annual Turner Prize in 1993.

Whiteread was one of the Young British Artists who exhibited at the Royal Academy's Sensation exhibition in 1997. Among her most renowned works are House, a large concrete cast of the inside of an entire Victorian house; the Judenplatz Holocaust Memorial in Vienna, resembling the shelves of a library with the pages turned outwards; and Untitled Monument, her resin sculpture for the empty fourth plinth in London's Trafalgar Square.

Whiteread was born in 1963 in Ilford, and raised in the Essex countryside until age seven when the family moved to London. Her mother, Patricia Whiteread (née Lancaster), who was also an artist, died in 2003 at the age of 72. Her father, Thomas Whiteread, was a geography teacher, polytechnic administrator and lifelong supporter of the Labour Party, who died when Whiteread was studying at art school in 1988. She is the third of three sisters – the older two being identical twins.

She took a workshop on casting with the sculptor Richard Wilson and began to realize the possibilities in casting objects. She was briefly at the Cyprus College of Art. From 1985 to 1987 she studied sculpture at Slade School of Art, University College, London, graduating with an MA in 1987.

For a time she worked in Highgate Cemetery fixing lids back onto time-damaged coffins. She began to exhibit in 1987, with her first solo exhibition coming in 1988. She lives and works in a former synagogue in east London with long-term partner and fellow sculptor Marcus Taylor. They have two sons.

Many of Whiteread's works are casts of ordinary domestic objects and, in numerous cases, their so-called negative space. For example, she is known for making solid casts of the open space in and around pieces of furniture such as tables and chairs, architectural details and even entire rooms and buildings. She says the casts carry "the residue of years and years of use." Whiteread mainly focuses on the line and the form for her pieces.

While still at the Slade, Whiteread cast domestic objects and created her first sculpture, Closet. She made a plaster cast of the interior of a wooden wardrobe and covered it with black felt. It was based on comforting childhood memories of hiding in a dark closet. After she graduated she rented space for a studio using the Enterprise Allowance Scheme. She created Shallow Breath (1988), the cast of the underside of a bed, made not long after her father died. Both sculptures were exhibited in her first solo show in 1988 along with casts of other domestic pieces. The work all sold and allowed her to apply for grants to find funding for larger sculptures.

After her first solo exhibition, Whiteread decided to cast the space that her domestic objects could have inhabited. She applied for grants, describing the project as "mummifying the air in a room." She completed Ghost in 1990. It was cast from a room in a house on Archway Road in north London, much like the house she grew up in. The road was being widened, and the house was torn down. She used plaster to cast the parlor walls and ceiling in sections and assembled them on a metal frame.