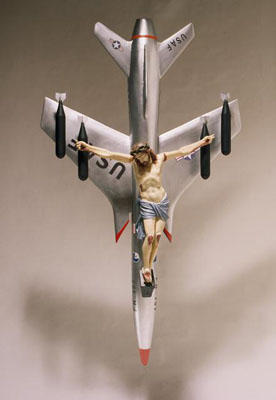 Conceptual art, sometimes simply called conceptualism, is art in which the concept(s) or idea(s) involved in the work take precedence over traditional aesthetic, technical, and material concerns. Some works of conceptual art, sometimes called installations, may be constructed by anyone simply by following a set of written instructions. This method was fundamental to American artist Sol LeWitt's definition of Conceptual art, one of the first to appear in print:

Tony Godfrey, author of Conceptual Art (Art &amp; Ideas) (1998), asserts that conceptual art questions the nature of art, a notion that Joseph Kosuth elevated to a definition of art itself in his seminal, early manifesto of conceptual art, "Art after Philosophy" (1969). The notion that art should examine its own nature was already a potent aspect of the influential art critic Clement Greenberg's vision of Modern art during the 1950s. With the emergence of an exclusively language-based art in the 1960s, however, conceptual artists such as Joseph Kosuth, Lawrence Weiner and the English Art &amp; Language group began a far more radical interrogation of art than was previously possible (see below). One of the first and most important things they questioned was the common assumption that the role of the artist was to create special kinds of material objects.

Through its association with the Young British Artists and the Turner Prize during the 1990s, in popular usage, particularly in the UK, "conceptual art" came to denote all contemporary art that does not practice the traditional skills of painting and sculpture. It could be said that one of the reasons why the term "conceptual art" has come to be associated with various contemporary practices far removed from its original aims and forms lies in the problem of defining the term itself. As the artist Mel Bochner suggested as early as 1970, in explaining why he does not like the epithet "conceptual", it is not always entirely clear what "concept" refers to, and it runs the risk of being confused with "intention." Thus, in describing or defining a work of art as conceptual it is important not to confuse what is referred to as "conceptual" with an artist's "intention."

The French artist Marcel Duchamp paved the way for the conceptualists, providing them with examples of prototypically conceptual works — the readymades, for instance. The most famous of Duchamp's readymades was Fountain (1917), a standard urinal-basin signed by the artist with the pseudonym "R.Mutt", and submitted for inclusion in the annual, un-juried exhibition of the Society of Independent Artists in New York (which rejected it). The artistic tradition does not see a commonplace object (such as a urinal) as art because it is not made by an artist or with any intention of being art, nor is it unique or hand-crafted. Duchamp's relevance and theoretical importance for future "conceptualists" was later acknowledged by US artist Joseph Kosuth in his 1969 essay, "Art after Philosophy," when he wrote: "All art (after Duchamp) is conceptual (in nature) because art only exists conceptually".