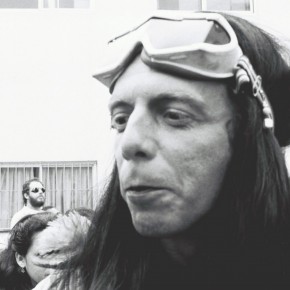 Hélio Oiticica (Portuguese: [ˈε.lju ɔj.tʃi.ˈsi.ka]; July 26, 1937 – March 22, 1980) was a Brazilian visual artist, sculptor, painter, performance artist, and theorist, best known for his participation in the Neo-Concrete Movement, for his innovative use of color, and for what he later termed "environmental art", which included Parangolés and Penetrables, like the famous Tropicália. Oiticica was also a filmmaker and writer.

Oiticica's family was educated and involved in liberal politics. His father taught mathematics, was an engineer, entomologist, and lepidopterologist, a scientist who researched butterflies. He was also an avid photographer, creating experimental photographs that were new to Brazil. His grandfather was a well known philologist, who studied literary texts and written records, and published an anarchist newspaper called Ação Direta [Direct Action].

Oiticica and his brothers were taught at home until their father got a fellowship at the Guggenheim Foundation. During this time, from 1947 to 1949, the family lived in Washington, D.C. while their father worked at the National Museum of Natural History. Oiticica and his brothers attended Thomson Elementary School. The family returned to Brazil in 1950.

Oiticica enrolled in art school at the age of 16 years.

Oiticica's early works, in the mid-1950s, were greatly influenced by European modern art movements, principally Concrete art and De Stijl. He was a member of Grupo Frente, founded by Ivan Serpa, under whom he had studied painting. His early paintings used a palette of strong, bright primary and secondary colours and geometric shapes influenced by artists such as Piet Mondrian, Paul Klee and Kazimir Malevich. Oiticica's painting quickly gave way to a much warmer and more subtle palette of oranges, yellows, reds and browns which he maintained, with some exceptions, for the rest of his life.

In 1959, he became involved in the short-lived but influential Neo-Concrete Movement. The Neo-Concrete Movement rejected the objective nature of Concrete Art and sought to use phenomenology to create art that "expresses complex human realities." This was stated in the manifesto written by Amílcar de Castro, Ferreira Gullar, Franz Weissmann, Lygia Clark, Lygia Pape, Reynaldo Jardim, Theon Spanudis and published in Rio de Janeiro in March 1959 called Manifesto neoconcreto.

Neo-Concretism focused creating an awareness within the spectator of his or her spatial relationship with the artwork. The artworks themselves became akin to living organism rather than static forms; they were made to interact with viewers.

During Oiticica’s Neo-Concrete period, he sought to “escape the constraints of painting while remaining in dialogue with it” by utilizing color in new ways. He painted monochromes entitled Invencoes (Inventions) in 1959. These small square wooden plaques (30 x 30 cm) were not made to represent light rather Oiticica sought to embody it. Oiticica questioned traditional ideas of aesthetics and art practices by considering the spectator and ideas of real space in his work.