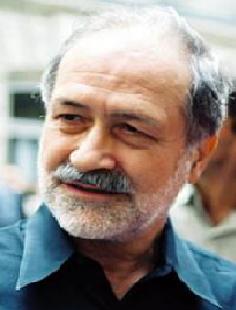 Hans Haacke (born August 12, 1936) is a German-born artist who currently lives and works in New York.

Haacke was born in Cologne, Germany. He studied at the Staatliche Werkakademie in Kassel, Germany, from 1956 to 1960. He was a student of Stanley William Hayter, a well-known and influential English printmaker, draftsman, and painter. From 1961 to 1962 he studied on a Fulbright grant at the Tyler School of Art at Temple University in Philadelphia. From 1967 to 2002 Haacke was a professor at the Cooper Union in New York City.

During his formative years in Germany, he was a member of Zero (an international group of artists, active ca. 1957-1966). This group was held together with common motivations: the longing to re-harmonize man and nature and to restore art's metaphysical dimension. They sought to organize the pictorial surface without using traditional devices.

Although their methods differed greatly, most of the work was monochromatic, geometric, kinetic, and gestural. But most of all they used nontraditional materials such as industrial materials, fire and water, light, and kinetic effects. The influence of the Zero group and the materials they used is clear in Haacke's early work from his paintings that allude to movement and expression to his early installations that are formally minimal and use earthly elements as materials.

These early installations focused on systems and processes. Condensation Cube (1963–65) embodies a physical occurrence, of the condensation cycle, in real time. Some of the themes in these works from the 1960s include the interactions of physical and biological systems, living animals, plants, and the states of water and the wind. He also made forays into land art, but by the end of the 1960s his art had found a more specific focus.

Haacke's interest in real-time systems propelled him into his criticism of social and political systems. In most of his work after the late 1960s, Haacke focused on the art world and the system of exchange between museums and corporations and corporate leaders; he often underlines its effects in site-specific ways.

Haacke has been outspoken throughout his career about demystifying the relationship between museums and businesses and their individual practices. He writes, "what we have here is a real exchange of capital: financial capital on the part of the sponsors and symbolic capital on the part of the sponsored". Using this concept from the work of Pierre Bourdieu, Haacke has underlined the idea that corporate sponsorship of art enhances their public reputation, which is of material use to them. Haacke believes, moreover, that both parties are aware of this exchange, and as an artist, Haacke is intent on making this relationship clear to viewers.

In 1970 Hans Haacke proposed a work for the exhibition entitled Information to be held at the Museum of Modern Art in New York (an exhibition meant to be an overview of current younger artists), according to which the visitors would be asked to vote on a current socio-political issue. The proposal was accepted, and Haacke prepared his installation, entitled MoMA Poll, but did not hand in the specific question until right before the opening of the show. His query asked, "Would the fact that Governor Rockefeller has not denounced President Nixon's Indochina Policy be a reason for your not voting for him in November?" Visitors were asked to deposit their answers in the appropriate one of two transparent Plexiglas ballot boxes. At the end of the exhibition, there were approximately twice as many Yes ballots as No ballots. Haacke's question commented directly on the involvements of a major donor and board member at MOMA, Nelson Rockefeller. This installation is an early example of what in the art world came to be known as institutional critique.