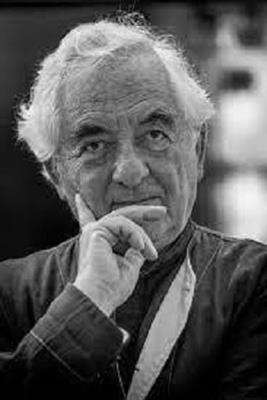 Sometimes classified as a Minimalist, Buren is known best for using regular, contrasting colored stripes in an effort to integrate visual surface and architectural space, notably on historical, landmark architecture.

Among his chief concerns is the "scene of production" as a way of presenting art and highlighting facture (the process of 'making' rather than for example, mimesis or representation of anything but the work itself). The work is site-specific installation, having a relation to its setting in contrast to prevailing ideas of an autonomous work of art.

He graduated from the Ecole Nationale Supérieure des Métiers d'Art in Paris, in 1960. He began painting in the early 1960s. However, by 1965 – a year he spent in the Grapetree Bay Hotel on the Caribbean island of Saint Croix where he was contracted to make frescoes – he had abandoned traditional painting for the 8.7 cm-wide vertical stripes, which alternated between white and one color, which have become his signature. Working on-site, he strives to contextualise his artistic practice using the stripe – a popular French fabric motif – as a means of visually relating art to its situation, a form of language in space rather than a space in itself. Denoting the trademark stripes as a visual instrument or "seeing tool," he invites viewers to take up his critical standpoint challenging traditional ideas about art.

He began producing unsolicited public art works using striped awning canvas common in France: he started by setting up hundreds of striped posters, so-called affichages sauvages, around Paris and later in more than 100 Metro stations, drawing public attention through these unauthorised bandit-style acts. In June 1970 he put stripes on the front and back of Los Angeles bus benches without permission. In another controversial gesture he blocked the entrance of the gallery with stripes of his first solo exhibition. Expanding on this idea, in 1971 he created a six-foot banner, Peinture-Sculpture, to divide the Solomon R. Guggenheim Museum's rotunda in New York. For his first New York City solo show in 1973, Buren suspended a set of nineteen black and white striped squares of canvas on a cable that ran from one end of the John Weber Gallery to the other, out the window to a building on the other side of West Broadway and back. Nine pieces were inside the gallery and nine outside; a middle piece, which connected the outside and the inside parts of the installation, was placed half-in and half-out in the opening where the window frame had been removed for the duration of the exhibition. In 1977 Buren cut up one of his artworks from 1969 and made a new work, designating that the sections should hang in the corners of a wall, whether that wall was empty, had doors or windows, or even had other artworks already hanging on it.

As a conceptual artist, Buren was regarded as visually and spatially audacious, objecting to traditional ways of presenting art through the museum-gallery system while at the same time growing in hot demand to show via the same system. In the late 1960s he connected to the ideas of space and presentation arising through deconstructionist philosophies that had as their background the May 1968 student demonstrations in France. Between 1966 and 1967, he joined forces with fellow artists Olivier Mosset, Michel Parmentier, and Niele Toroni to form the BMPT, whose intention was to reduce paintings to the most basic physical and visual elements through the systematic repetition of motifs.