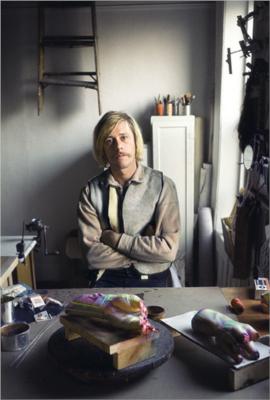 Paul Thek (November 2, 1933 - August 10, 1988) was an American painter and, later, sculptor and installation artist. Born in Brooklyn, he studied locally, at the Art Students League and Pratt Institute. In 1951 he entered Cooper Union.

Although Thek began as a painter, he became known later in life for his sculptures and installations. Notable works include Technological Reliquaries (1964–67), a series of wax sculptures of human body parts presented on pedestals in glass or acrylic cases, and The Tomb (1967), a bright pink ziggurat installation. The pink ziggurat had a ramp that led to an effigy of the artist inside with a casted replica of Thek's body. Thek realized an alter ego in this piece which began his interest as a performance artist. Unfortunately The Tomb was badly damaged in 1981, however the piece was documented in Edwin Klein's black and white photographs. Today his work may be seen in numerous collections, including that of the Hirshhorn Museum and Sculpture Garden in Washington, D.C. and the Whitney Museum of American Art in New York.

Thek, who was bisexual, died of AIDS related illness in New York City in 1988, aged 54.

George Joseph Thek was born the second of four children to parents of German and Irish ancestry. In 1950, Thek studied at the Art Students League of New York as well as Pratt Institute in Brooklyn, and finally at Cooper Union School of the Arts in New York from 1951 until 1954.

In 1954, Thek moved to Miami and worked in several different occupations. He formed a partnership with the set designer Peter Harvey, who would design for Balanchine and who introduced him to artists, composers and writers, among them Tennessee Williams. During this time, he created some of his first well-known drawings, including studies in charcoal and graphite, later followed by abstract watercolors and monochrome oil paintings. Thek first referred to himself as Paul Thek starting in 1955. In 1957 Thek exhibited his works for the first time in a Miami gallery.

After his return to New York in 1959, his artistic circle of friends included photographer Peter Hujar, as well as Joseph Raffaele, artist Eva Hesse and Ann Wilson, in addition to Gene Swenson and Susan Sontag. From 1959 until 1962, Thek worked as a textile designer for Prince Studios in New York. During the years between 1962 and 1964, Thek lived and worked in Rome, until his return to New York in 1964. In 1964, he participated in Screen Test by Andy Warhol. His works from 1966 were produced by casting parts from his own body. From the late 1960s and onward, Thek aroused interest with his processual and situation-oriented installations and environments.

During the 1970s, Thek lived in Italy, where he created many works in conjunction with friend and photographer Peter Hujar. In 1976, Thek returned to New York once again. Having lost what prestige he had accumulated in the American art scene of the 1960s, he spent his remaining days washing floors and bagging groceries, however creating art all along. On August 10, 1988, Thek, weakened by HIV/AIDS, died of illness. Susan Sontag dedicated her classic and influential 1966 collection of critical essays, Against Interpretation, which took up with the latest developments in European critical thought—notably that of Roland Barthes—and her later AIDS and its Metaphors to Thek's memory.