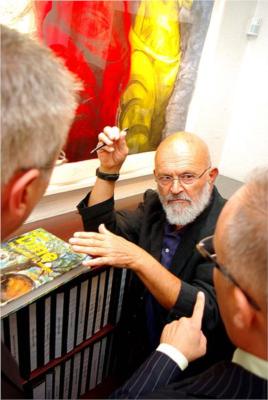 Jim Dine (born June 16, 1935) is an American pop artist. He is sometimes considered to be a part of the Neo-Dada movement.

He was born in Cincinnati, Ohio. He graduated from Walnut Hills High School and went to University of Cincinnati. In 1953, he attended evening classes at The Art Academy of Cincinnati taught by the influential instructor, Paul Chidlaw. Dine received a BFA from Ohio University in 1957.

He first earned respect in the art world with his Happenings. Pioneered with artists Claes Oldenburg and Allan Kaprow, in conjunction with musician John Cage, the "Happenings" were chaotic performance art that was a stark contrast with the more somber mood of the expressionists popular in the New York art world. The first of these was the 30-second The Smiling Worker performed in 1959.

In 1962 Dine's work was included, along with Roy Lichtenstein, Andy Warhol, Robert Dowd, Phillip Hefferton, Joe Goode, Edward Ruscha, and Wayne Thiebaud, in the historically important and ground-breaking New Painting of Common Objects, curated by Walter Hopps at the Norton Simon Museum. This exhibition is historically considered one of the first "Pop Art" exhibitions in America. These painters started a movement, in a time of social unrest, which shocked America and the art world. The Pop Art movement fundamentally altered the nature of modern art.

In the early 1960s, he began attaching objects, particularly tools of autobiographical significance, to his canvases. Job #1 from 1962, in the collection of the Honolulu Museum of Art, which incorporates paint cans, paint brushes, a screwdriver, and a piece of wood is an example of such a pop art work. These provided commercial as well as critical success, but left Dine unsatisfied. In September 1966 police raided an exhibition of his work displayed at Robert Fraser's gallery in London, England. Twenty of his works were seized and Fraser was charged under the Obscene Publications Act of 1959, Dine's work was found to be indecent but not obscene and Fraser was fined 20 guineas. The following year Dine moved to London and continued to be represented by Fraser, spending the next four years developing his art.

Returning to the United States in 1971 he focused on several series of drawings. Since 1976 Dine has been represented by The Pace Gallery. In the 1980s sculpture resumed a prominent place in his art. In the time since then there has been an apparent shift in the subject of his art from man-made objects to nature.

According to James Rado, co-writer (with Gerome Ragni) of the rock musical Hair, it was a Dine piece entitled Hair which gave them the name.

The Virginia Museum of Fine Arts purchased six works by Dine, and in 1983 he was a juror in “The Next Juried Show” at the VMFA, judging prints and drawings. The juried shows at the VMFA were a series of biennial exhibitions covering all areas including Communication Arts, Craft Media, Painting & Sculpture, Photography, Video Arts, and Prints and Drawings, each on an every-other-year schedule. “The Next Juried Show” was the last of the series, however.