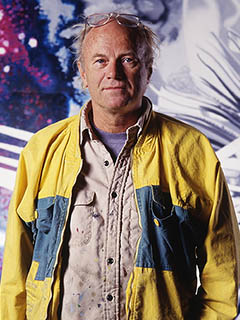 James Rosenquist (November 29, 1933 – March 31, 2017) was an American artist and one of the protagonists in the pop art movement. Drawing from his background working in sign painting, Rosenquist’s pieces often explored the role of advertising and consumer culture in art and society, utilizing techniques he learned making commercial art to depict popular cultural icons and mundane everyday objects. While his works have often been compared to those from other key figures of the pop art movement, such as Andy Warhol and Roy Lichtenstein, Rosenquist’s pieces were unique in the way that they often employed elements of surrealism using fragments of advertisements and cultural imagery to emphasize the overwhelming nature of ads. He was a 2001 inductee into the Florida Artists Hall of Fame.

Rosenquist was born on November 29, 1933 in Grand Forks, North Dakota, the only child of Louis and Ruth Rosenquist. His parents were amateur pilots of Swedish descent who moved from town to town to look for work, finally settling in Minneapolis, Minnesota. His mother, who was also a painter, encouraged her son to have an artistic interest. In junior high school, Rosenquist won a short-term scholarship to study at the Minneapolis School of Art and subsequently studied painting at the University of Minnesota from 1952 to 1954. In 1955, at the age of 21, he moved to New York City on scholarship to study at the Art Students League.

After leaving school, Rosenquist took a series of odd jobs and then turned to sign painting. From 1957 to 1960, Rosenquist earned his living as a billboard painter. Rosenquist applied sign-painting techniques to the large-scale paintings he began creating in 1960. Like other pop artists, Rosenquist adapted the visual language of advertising and pop culture to the context of fine art. "I painted billboards above every candy store in Brooklyn. "I got so I could paint a Schenley whiskey bottle in my sleep", he wrote in his 2009 autobiography, Painting Below Zero: Notes on a Life in Art. "Time" magazine stated that "his powerful graphic style and painted montages helped define the 1960s Pop Art movement." ("Milestones James Rosenquist," "Time," April 17, 2017, p. 15)

In 2003, art critic Peter Schjeldahl asked of Rosenquist's application of sign painting techniques to fine art thus: "[W]as importing the method into art a bit of a cheap trick? So were Warhol’s photo silk-screening and Lichtenstein’s lining of panels from comic strips. The goal in all cases was to fuse painting aesthetics with the semiotics of media-drenched contemporary reality. The naked efficiency of anti-personal artmaking defines classic Pop. It’s as if someone were inviting you to inspect the fist with which he simultaneously punches you."

Rosenquist had his first two solo exhibitions at the Green Gallery in 1962 and 1963. He exhibited his painting F-111, a room-scale painting, at the Leo Castelli Gallery in 1965, with which he achieved international acclaim.

But Rosenquist said the following about his involvement in the Pop Art movement: "They [art critics] called me a Pop artist because I used recognizable imagery. The critics like to group people together. I didn't meet Andy Warhol until 1964. I did not really know Andy or Roy Lichtenstein that well. We all emerged separately."