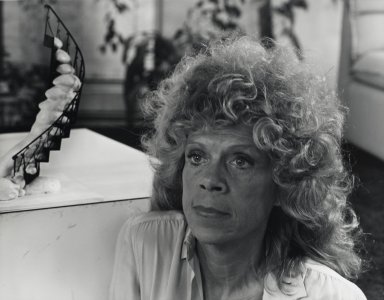 Born in 1931 in Guthrie, Oklahoma, Strider studied art at the Kansas City Art Institute before moving to New York City in the early 1960s. Strider's three-dimensional paintings of beach girls with "built out" curves were prominently featured in the Pace Gallery's 1964 "International Girlie Show" alongside other "pin-up"-inspired Pop art by Rosalyn Drexler, Roy Lichtenstein, Andy Warhol, and Tom Wesselman. Her comically pornographic Woman with Radish was made into the banner image for the show, one of the first successful exhibitions of the then-new gallery. Her bold figural work from this era aimed to subvert sexist images of women in popular culture by turning objectified female bodies into menacing forms that literally got "in your face." Strider had two subsequent solo exhibitions at the Pace Gallery in 1965 and 1966 where she continued to show her voluminous paintings of bikini-clad girls as well as 3-D renderings of vegetables, fruits, flowers, clouds and other natural phenomena.

Strider became a core member of the 1960s avant-garde. She performed in Happenings organized by Allan Kaprow, Claes Oldenburg and others. In 1969 she organized with Hannah Weiner and John Perreault the first Street Work, an informal public art event. Twenty artists participated including Vito Acconci, Gregory Battcock and Arakawa. Strider's contribution was thirty empty picture frames which she hung in random locations in Midtown Manhattan in the hopes of getting pedestrians to look at their environment differently. Strider married Michael Kirby, a contemporary artist and writer who published the first book on Happenings in 1965.

Around this time Strider made chocolate casts of Patty Oldenburg's breasts for Claes's birthday (a plaster version was later acquired by Sol LeWitt). Perhaps it was her intimate friendship with the Oldenburgs that led Strider to redirect her artistic focus from hard sculptural paintings to soft sculpture in the 1970s. She made site-specific installations of unbridled polyurethane foam that tumbled out of windows (Building Work 1976, PS1) or oozed down a spiral staircase (Blue Sky 1976, Clocktower Gallery). At times her renegade pours incorporated domestic objects (brooms, groceries, teapots), while others remained totally amorphous. These works are similar in style and intent to Lynda Benglis' floor paintings and soft sculptures of the same era.

From 1982 to 1985, a retrospective of her work toured museums and universities across the United States. Venues included: SculptureCenter, New York; Gibbes Museum of Art, Charleston, South Carolina; Joslyn Art Museum, Omaha, Nebraska; Museum of Art, University of Arizona, Tucson; and the McNay Art Museum, San Antonio, Texas. In the 1990s, she began to make paintings with tactile surfaces that were more Abstract Expressionist than Pop. In 2009 she revisited her original girlie theme, painting new examples which she exhibited at the Bridge Gallery, New York.

Marjorie Strider died at her home in Saugerties, New York, on August 27, 2014.