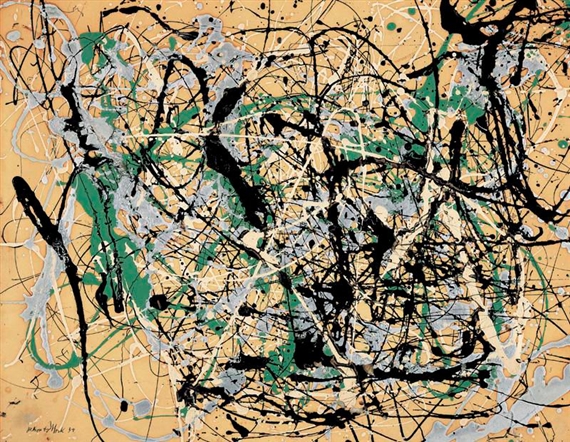 Abstract Expressionism is the art movement of mostly non-representative painting. It flourished in the US in the 1940s and 1950s. Despite its name, it was neither wholly abstract nor expressionist and comprised several quite different styles. What united them in one art movement was an intention to redefine the nature of painting.

The emergence and quick spread of Abstract Expressionism became possible due to several factors. The first one was the arrival to the US of numerous modern artist refugees from European totalitarian regimes of the 1930s and war disasters of the 1940s (Arshile Gorky, Hans Hofmann, George Grosz, Fernand Leger, Josef Albers, Piet Mondrian, Marcel Duchamp, Yves Tanguy, Max Ernst). The second one was the appearance of a brand new network of NY museums and galleries that staged (for the first time in the US) major exhibitions of European modern art (MOMA was founded in 1929 and gained its popularity by exposing collections of Cubism, Abstract Art, Dada, Surrealism as well as retrospectives of Leger, Matisse, and Picasso; Guggenheim Museum started its career in 1939 by a grand exhibition of Kandinsky). And the third factor was the support of art critics (Clement Greenberg), wealthy patrons, and collectors (Peggy Guggenheim, Leo Castelli). They supplied artists with finances and positive reviews and promptly made this new art movement fashionable and trendy.

Abstract Expressionism originates from surpassing the Great Depression (when the US suffered economically and – as opposed to Europe – was culturally isolated and provincial) and from overcoming the collective post-war trauma. Two main American art movements of the 1930s - Regionalism and Social Realism – were unapt to provide the language for an emerging reality. It was expressed in Existentialist philosophy which rejected trust in reason, humanism, scientific and technological progress, and preached a tragic worldview, sense of loneliness, and utmost attention to the inner world of the individual. This perception of reality was reflected in Abstract Expressionism. This movement resumed in the US the trend started in Europe by Abstract Art and Surrealism. It liberated the art from laws of logic and laws of color syntax set by European culture and referred to religion, myth, and chaos of the unconscious.

Abstract Expressionism emerged in two different “versions”. The first one was Action Painting (Jackson Pollock, Willem de Kooning), where the artist used expressive spontaneous gestures to splash paints and to draw lines. The second version was Color Field Painting (Barnett Newman, Mark Rothko), that obliged artists to work with a huge array of paints in a more calm manner. Both versions were united by the monumental size of canvasses (and sculptures), by color flowing without restraint, and by an emphasis on the process (rather than on the result) of image creation.

In the early 1950s, New York became the world art capital. This status was confirmed, above all, by emerging of New York School – an informal group of artists, poets, musicians, and dancers who professed the principles of Abstract Expressionism. Since the mid-1950s, it became a powerful international trend, capturing almost all continents. Art Informel, Tashisme, and COBRA group may be considered as European counterparts of this art movement. By the early 1960s, Abstract Expressionism had exhausted its potential, but its themes and techniques proceeded to Op Art, Minimalism, Neo-Expressionism, and other art movements.