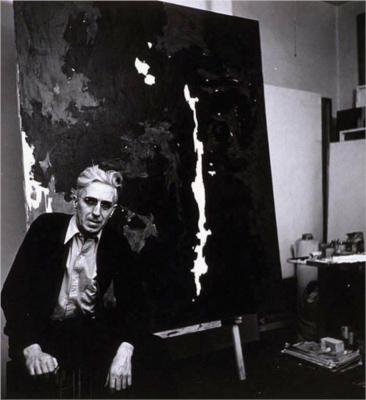 Clyfford Still was an American painter. He was one of the most original and influential first-generation Abstract Expressionists, being often credited for having shifted from representational painting to abstraction earlier than his colleagues.

Still was born in 1904 in Grandin, North Dakota and spent his childhood in Spokane, Washington and Bow Island in southern Alberta, Canada. Although Abstract Expressionism is identified as a New York movement, Still's formative works were created during various teaching posts on the West Coast. His work of this period is marked by an expressive figurative style used in depictions of the people, buildings, tools and machinery characteristic of farm life. By the late 1930s, he began to simplify his forms as he moved from representational painting toward abstraction. In 1941 Still relocated to the San Francisco Bay area where, following work in various war industries, he became a highly influential professor at the California School of Fine Arts, now known as the San Francisco Art Institute. He taught there from 1946-1950 - it was during this time when Still "broke through" to his mature style.

Still visited New York for extended stays in the late 1940s and became associated with two of the galleries that launched the new American art to the world — Peggy Guggenheim's The Art of This Century Gallery and the Betty Parsons gallery. Rothko introduced him to Peggy Guggenheim, who gave him a solo exhibition at her Art of This Century gallery in early 1946. Later that year, the artist returned to San Francisco, where he taught for the next four years at the California School of Fine Arts. He lived in New York for most of the 1950s, the height of Abstract Expressionism, but also a time when he became increasingly critical of the art world. In the early 1950s, Still severed ties with commercial galleries and in 1961 moved to a farm near Westminster, Maryland, removing himself further from the art world. He remained in Maryland with his second wife, Patricia, until his death in 1980. Following his death, all works that had not entered the public domain were sealed off from both public and scholarly view, closing off access to one of the most significant American painters of the 20th century. Still received the Award of Merit for Painting in 1972 from the American Academy of Arts and Letters, of which he became a member in 1978, and the Skowhegan Medal for Painting in 1975.

Still was also considered one of the foremost Color Field painters - his non-figurative paintings are non-objective, and largely concerned with juxtaposing different colors and surfaces in a variety of formations. Unlike Mark Rothko or Barnett Newman who organized their colors in a relatively simple way (Rothko in the form of nebulous rectangles, Newman in thin lines on vast fields of color), Still's arrangements are less regular.

Clyfford Still (November 30, 1904 – June 23, 1980) was an American painter, and one of the leading figures in the first generation of Abstract Expressionists, who developed a new, powerful approach to painting in the years immediately following World War II. Still has been credited with laying the groundwork for the movement, as his shift from representational to abstract painting occurred between 1938 and 1942, earlier than his colleagues like Jackson Pollock and Mark Rothko, who continued to paint in figurative-surrealist styles well into the 1940s.

Still was born in 1904 in Grandin, North Dakota and spent his childhood in Spokane, Washington and Bow Island in southern Alberta, Canada. In 1925 he visited New York, briefly studying at the Art Students League. He attended Spokane University from 1926 to 1927 and returned in 1931 with a fellowship, graduating in 1933. That fall, he became a teaching fellow, then faculty member at Washington State College (now Washington State University), where he obtained his Master of Fine Arts degree in 1935 and taught until 1941. He spent the summers of 1934 and 1935 at the Trask Foundation (now Yaddo) in Saratoga Springs, New York.

In 1937, along with Washington State colleague Worth Griffin, Still co-founded the Nespelem Art Colony that produced hundreds of portraits and landscapes depicting Colville Indian Reservation Native American life over the course of four summers.

Mark Rothko, whom Still had met in California in 1943, introduced him to Peggy Guggenheim, who gave him a solo exhibition at her gallery, The Art of This Century Gallery, in early 1946. The following year Guggenheim closed her gallery and Still, along with Rothko and other Abstract Expressionists, joined the Betty Parsons gallery.

Still returned to San Francisco, where he became a highly influential professor at the California School of Fine Arts (now San Francisco Art Institute), teaching there from 1946 to 1950. He lived in New York for most of the 1950s, the height of Abstract Expressionism, but also a time when he became increasingly critical of the art world. In the early 1950s, Still severed ties with commercial galleries. In 1961 he moved to a 22-acre farm near Westminster, Maryland, removing himself further from the art world. Still used a barn on the property as a studio during the warm weather months. In 1966, Still and his second wife purchased a 4,300-square-foot house at 312 Church Street in New Windsor, Maryland, about eight miles from their farm, where he lived until his death.

Still married Lillian August Battan in about 1930. They had two daughters born in 1939 and 1942. The couple separated in the late 1940s and divorced in 1954. In 1957 he married Patricia Alice Garske, who had been one of his students at Washington State and was 16 years his junior.