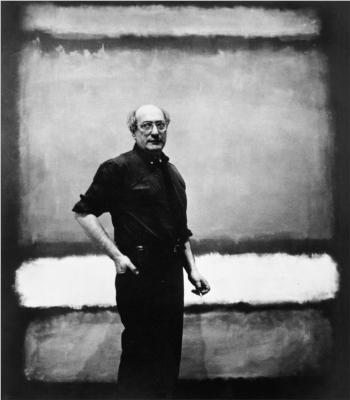 Rothko in his studio

Mark Rothko is a key figure in Abstract Expressionism, best known for his large color field paintings like No.61 (Rust and Blue) (1953). Born Markus Rothkowitz in Dvinsk, Russian Empire (now Latvia) in 1903, Rothko and his family immigrated to the United States in 1913. He began his undergraduate studies at Yale University in 1921 but left two years later to move to New York. Rothko took classes at the Art Students League and was briefly a student of Jewish-American painter Max Weber, but he was mostly a self-taught painter. During his early years, he painted different scenes of the New York subway, like Entrance to the Subway (1938), that dealt with feelings of alienation in city life. Rothko also co-founded the art group The Ten in 1935, whose members included artists William de Kooning, Ilya Bolotowsky, William Baziotes, and Adolph Gottlieb. Members of The Ten rejected realist painting, which in its different forms dominated the American cultural landscape of the time.

Like other abstract expressionists, Rothko showed a profound interest in European Surrealism, particularly in the works of artists, Joan Miró and André Masson. Throughout the 1940s, Rothko created Surrealist images dominated by amorphous shapes; for example, Primeval Landscape (1945) and Tentacles of Memory (1946). Towards the end of the 1940s, Rothko began transitioning toward entirely abstract painting. His initial abstract paintings, collectively known as ‘Multiforms,’ were composites of colorful free form shapes. By 1950, Rothko had developed his mature abstract style: he reduced his abstractions to a few floating rectangles vertically aligned against a color background. Rothko created paintings like No.61 (Rust and Blue) intending to communicate the essence of the human condition. By focusing on the pure essence of color and structure, the artist wanted his color field paintings to generate symbolic and metaphysical meaning.

One of Rothko’s most famous works was commissioned in 1964 by art patrons, John and Dominique de Menil. The couple admired the spiritual character of Rothko’s paintings and tasked him with the decoration of a Catholic chapel in Houston. Besides, Rothko was given control over the design of the space, which led to several arguments between the artist and the architect, Philip Johnson. Eventually, Johnston was replaced with Howard Barnstone and his partner Eugene Aubry, who worked closely with Rothko to translate his vision into architectural terms. Rothko worked tirelessly on the commission, selecting fourteen paintings that were distributed symmetrically on the walls of the chapel. For the chapel’s apse, he created a monochrome triptych painting in which the two side panels were positioned lower than the central one. Half of the paintings had a black color field, while the rest mixed dark tones of blue, crimson, and maroon. The dark palette was not a surprising artistic choice: Rothko primarily painted in dark tones from the second half of the 1950s up until the end of his life. The atmosphere of the chapel was of silent darkness. In his dark paintings, Rothko tried to evoke a spiritual experience that went beyond the word of God.

Rothko committed suicide on February 25th, 1970. He failed to see the completion of the chapel in 1971, which was named The Rothko Chapel in his honor.

Mark Rothko was born in Dvinsk, Vitebsk Governorate, in the Russian Empire (today Daugavpils in Latvia). His father, Jacob (Yakov) Rothkowitz, was a pharmacist and an intellectual who initially provided his children with a secular and political, rather than religious, upbringing. According to Rothko, his pro-Marxist father was "violently anti-religious". In an environment where Jews were often blamed for many of the evils that befell Russia, Rothko's early childhood was plagued by fear.

Despite Jacob Rothkowitz's modest income, the family was highly educated ("We were a reading family", Rothko's sister recalled), and Rothko was able to speak Russian, Yiddish, and Hebrew. Following his father's return to the Orthodox Judaism of his own youth, Rothko, the youngest of four siblings, was sent to the cheder at the age of five, where he studied the Talmud, although his elder siblings had been educated in the public school system.

Fearing that his elder sons were about to be drafted into the Imperial Russian Army, Jacob Rothkowitz emigrated from Russia to the United States. Markus remained in Russia, with his mother and elder sister Sonia. They arrived as immigrants, at Ellis Island, in late 1913. From that point, they crossed the country, to join Jacob and the elder brothers, in Portland, Oregon. Jacob's death, a few months later, from colon cancer, left the family without economic support. Sonia operated a cash register, while Markus worked in one of his uncle's warehouses, selling newspapers to employees. His father's death also led Rothko to sever his ties with religion. After he had mourned his father's death for almost a year at a local synagogue, he vowed never to set foot in it again.

Markus started school in the United States in 1913, quickly accelerating from third to fifth grade. In June 1921, he completed the secondary level, with honors, at Lincoln High School in Portland, at the age of seventeen. He learned his fourth language, English, and became an active member of the Jewish community center, where he proved adept at political discussions. Like his father, Rothko was passionate about issues such as workers’ rights, and women's right to contraception. At the time, Portland was the epicentre of revolutionary activity in the U.S., and the region where revolutionary syndicalist union Industrial Workers of the World (IWW), was strongest.

Markus, having grown up around radical workers' meetings, attended meetings of the IWW, including anarchists such as Bill Haywood and Emma Goldman, where he developed strong oratorical skills he would later use in defence of Surrealism. He heard Emma Goldman speak on one of her West Coast activist lecture tours. With the onset of the Russian Revolution, Rothko organised debates about it. Despite the repressive political atmosphere, he wished to become a labor union organiser.

Rothko received a scholarship to Yale. At the end of his freshman year in 1922, the scholarship was not renewed, and he worked as a waiter and delivery boy to support his studies. He found the Yale community to be elitist and racist. Rothko and a friend, Aaron Director, started a satirical magazine, The Yale Saturday Evening Pest, which lampooned the school's stuffy, bourgeois tone. In any event, Rothko's nature was more that of a self-taught man than a diligent pupil: "One of his fellow students remembers that he hardly seemed to study, but that he was a voracious reader." At the end of his sophomore year, Rothko dropped out, and did not return until he was awarded an honorary degree, forty-six years later.