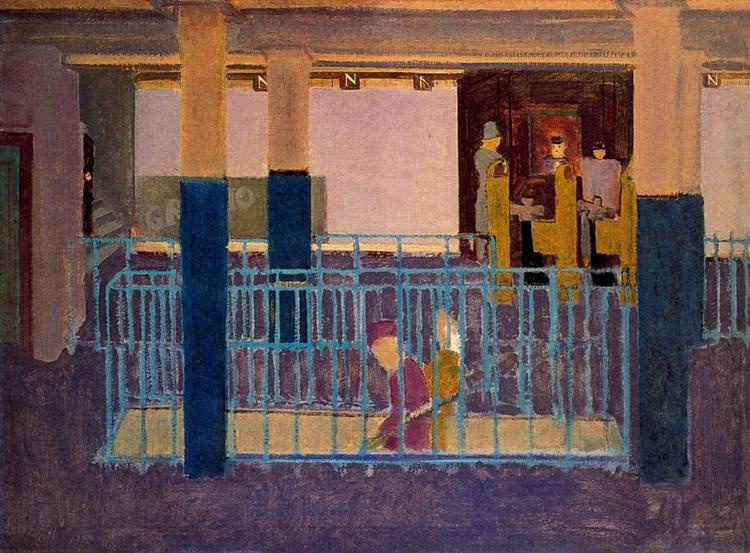 Entrance to the Subway (1938) is one of Mark Rothko’s paintings that depicts scenes of the New York subway. Although Rothko never purposefully created a series of subway paintings, this was a recurring theme in his early works. Rothko moved to New York in 1923 after giving up his studies at Yale University. In New York, he attended classes at the Art Students League. Several years later, Rothko met the modernist painter Milton Avery, who had a profound impact on his early artistic development, particularly on the application and treatment of color. Additionally, the slightly elongated figures in Entrance to the Subway are reminiscent of Avery’s figures in paintings like Artist’s Wife (1930).

Entrance to the Subway, along with Untitled (Subway) (ca.1937) and Underground Fantasy (1940), shows the alienation of city life. It is similar to the atmosphere Edward Hopper projected in paintings Automat (1927) and Chop Suey (1929) that expressed the same kind of urban loneliness and isolation. Rothko admired Hopper and even painted Composition I (1931) as an homage to Hopper.

Though paintings like Entrance to the Subway are related to Depression-era realist paintings, the similarity mainly stems from the common subject matter of urban life. Generally, Rothko rejected the principles of realist painting, whether it was Social Realism or American Regionalism. In fact, in 1935, Rothko co-founded the art group The Ten, whose members included artists Willem de Kooning, William Baziotes, and Adolph Gottlieb. In 1938, the group held an exhibition called The Ten Whitney Dissenters, vocalizing their dissatisfaction with the Whitney Museum of American Art. The artists condemned the Museum policy of supporting realist styles. Thus, Rothko and his colleagues positioned themselves as revolutionary outcasts, showing disdain for the art establishment as well as for the socialist realist left orthodoxy.

In this period, Rothko chose to paint in an expressionist style, which suited his artistic approach. He was not interested in the realism of city life; rather, he wanted to express the emotional perception of the urban environment. Entrance to the Subway has a dark and haunting atmosphere. While the viewer can recognize the human figures as commuters and subway workers, for the most part, they remain faceless, emphasizing the feeling of isolation and alienation. In the monotonous routine of daily life, the individual can only identify people superficially but cannot make a meaningful or lasting connection.
Even though stylistically Entrance to the Subway is very different from the color-field paintings like Yellow, Charcoal, Brown (1953) Rothko is known for, this early work hints at his future artistic development. In Entrance to the Subway, Rothko demonstrated sophisticated use of color that will later become a focal point in his work.