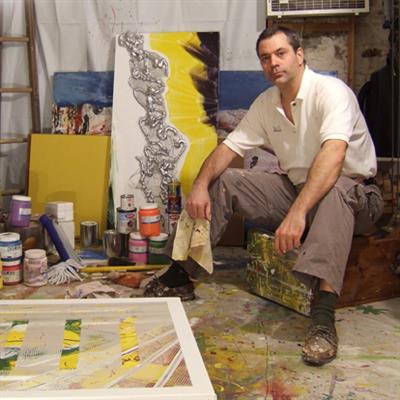 For over three decades, Gibbons has created abstract paintings that explores the expression of movement with an interacting arrangements of color & texture. Each composition is the result of a deliberative process guided by careful attention to spatial relationships. Working slowly, he accumulate paint gradually, allowing the process of arriving at a given formation to take precedence.

Gibbons is a non-representational abstract painter born in Montreal, now living in Toronto. He generally works with acrylic paints, but does a great deal of combining materials and mediums. Schooled in the visual arts and in architecture (ultimately receiving a license to practice), his works have been exhibited in arts fairs & galleries across the USA, Canada & internationally.

In 2014, Gibbons was featured by Acrylic Artist Magazine as one of the 29 Top Painters. His 3 gallery tour of China in 2007-2008 landed him a feature on Arts & Culture in 2008 with Dr. Yawei Ciu on OMNI-TV. Over the last 8 years, his works have been exhibited in 7 solo shows, 8 group shows, plus 2 TV features & several magazines. The works of Charles Gibbons have found their way into art collections in Nashville, New York, Naples, Toronto, Montreal, and internationally in Singapore, Beijing & Tokyo.

All of his works endeavour's to transcend time. He does not want to create art that addresses current fads, or requires dialogue to be understood and appreciated. His works reaches into the cultural soul, now and for the future. After over 30 years in the art world, over 50 exhibitions, a couple of books, several magazine articles, Gibbons works are still evolving.

The Contemporary Art Review said after my last New York show that “One of the most impressive qualities that emerges out of each work of Charles Gibbons is its lyrical drive which forms a visual choreography of parts related to wholes as well as voids and subtle coloristic tonalities connected to compositional shapes. The compelling drama of energized suspension pervades all of Gibbons’ artistic work.”
Gibbons strongest artistic influences are a combination of architects, artists, and mathematicians. For mathematics is the study of abstraction + logic, shapes + motion which are all present in art. All his works explores the structure of energy and space.


Charles Gibbons was born in Montreal, Quebec and studied architecture, arts, and environmental psychology. He worked as an architect for several years, including apprenticing with Arthur Erickson Architects.


Initially he was influenced by the works of geometric abstractionists such as Sol LeWitt, Kenneth Noland, and Frank Stella. His first exhibition was in Calgary, Alberta featuring his geometric abstractions, while studying Environmental Psychology in the early 1980s. In the mid-1980s while working for Arthur Erickson he was influenced by abstract expressionists such as Mark Rothko, Barnett Newman, Jackson Pollock, and Sam Francis.


His current works are generally characterized as meaningful abstraction with bold contrasting colours. His works have been shown at the Toronto International Art Fair, Fort Myers Alliance for the Arts, Singapore International Contemporary Art Fair, and the Huitai National Art Center in China. He is represented in art collections in Canada, the United States, Japan, China, and Singapore.