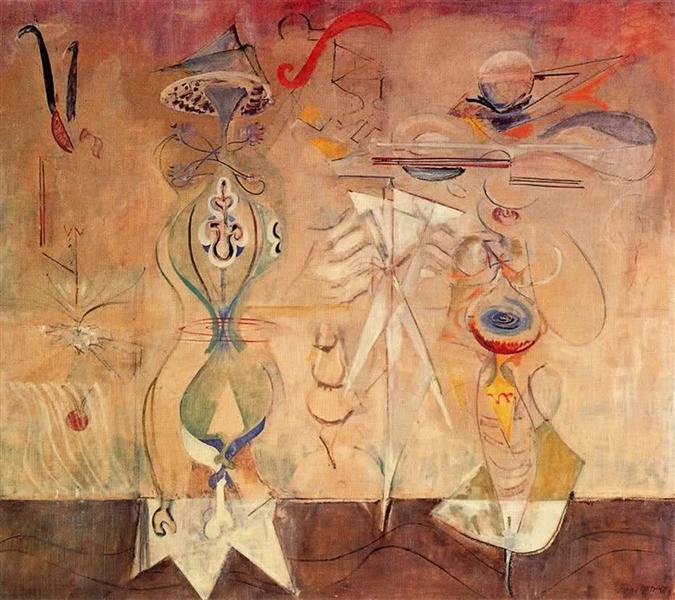 Slow Swirl at the Edge of the Sea

Slow Swirl at the Edge of the Sea (1944) is representative of Rothko’s Surrealist period that lasted roughly from 1936 to 1948. This artwork also has a personal dimension, as Rothko painted it shortly after meeting his soon to be second wife, Mary Ellen “Mell” Beistle. According to their son, the painting hung in the living room of their brownstone in New York. The image depicts two creatures, possibly Rothko and Mell, sitting side by side, between the sea and the sky. Like Surrealists before him, Rothko found inspiration in the realm of his unconsciousness. His surrealist period lasted throughout World War II. In his paintings, he escaped from the terrors of contemporary life and sought to return to primal beginnings of the essential sources of life, myth, and art. In prior decades, these ideas preoccupied Surrealist artists, like Joan Miró in The Birth of the World, who attempted to recreate the mythic and biological origins of the universe.

Slow Swirl at the Edge of the Sea shares common elements with Miró’s The Family (1924). Both have fragments of eyes, birds, and amorphous shapes swirling in the background. These fragments and forms bring to mind archeological artifacts excavated from ancient civilizations that developed in Mesopotamia, Greece, Mexico, and the Northeast Pacific. This resemblance is not coincidental; during the 1930s and the 1940s, there were exhibitions of indigenous art held at the Museum of Modern Art (MOMA) in New York. The totemic figures in Slow Swirl could have been inspired by the figures of the Sky Father and Earth Mother in Navajo sand paintings that were exhibited in the 1941 MOMA exhibition “Indian Art of the United States.”

Another important source of influence was French Surrealist, André Masson. There is a particular connection between Slow Swirl and Masson’s drawing Unity of the Cosmos (1943) from his book Anatomy of the Universe. Masson’s illustration depicts an imaginary species of hybrids that are mixtures of a mechanic, human, insect, plant elements. In Slow Swirl, Rothko echoes some of the shapes and the style of Masson’s imaginary beings. Like Masson, Rothko examines the origin of the universe and conjures images of the Book of Genesis. However, Rothko himself explained that there was no clear association to any specific visual experiences, although they do embody the principle and passion of organisms. Therefore, two figures at the edge of the sea can be associated with Adam and Eve, but in a universal sense, as the very principals of male and female organisms.

Rothko’s undergraduate studies in natural sciences at Yale University were also significant. Scholars have pointed out the connection between Rothko’s surrealist imagery and diagrams of geological stratification found in undergraduate textbooks. Another essential element of Slow Swirl is a sense of transparency that would become central in his later works. Therefore, not only Slow Swirl at the Edge of the Sea is representative of Rothko’s Surrealist period, but it also is a prefiguration of his future works.