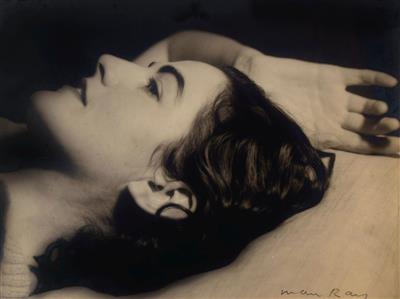 Alice Phillipot (Alice Rahon) (8 June 1904 – September 1987) was a French/Mexican poet and artist, whose work contributed to the beginning of abstract expression in Mexico. She began as a surrealist poet in Europe, but began painting in Mexico. She was a prolific artist from the late 1940s to the 1960s, exhibiting frequently in Mexico and the United States, with a wide circle of friends in these two countries. Her work remained tied to surrealism, but was also innovative including abstract elements and the use of techniques such as sgraffito and the use of sand for texture. She became isolated in her later life due to health issues, and except for retrospectives at the Palacio de Bellas Artes in 1986 and at the Museo de Arte Moderno in 2009 and 2014, has been largely forgotten despite her influence on Mexican modern art.


Rahon was born Alice Marie Yvonne Philppot in Chenecey-Buillon, Quingey in the east of France. Her most vivid memories of childhood were of Brittany, the house of her paternal grandparents in Roscoff, where she passed long periods of time in the summer and during the Christmas holidays. She also remembered visiting the beaches of Morlaix.


When she was about three years old, she suffered a serious accident which put her in casts and affected the rest of her life. One of the injuries was a fracture in the right hip which forced her to recuperate lying down for long periods of time. This left her isolated from other children, including her younger sister Geo, spending time in the family garden reading, writing and drawing to occupy her mind. This isolation was reinforced when she fell again at age twelve, breaking a leg. These events gave her an identity of fragility and by the time she was a teenager, she preferred solitude, creating worlds of her own imagination. For the rest of her life she always walked with a slight limp and pain.


She became pregnant when she was very young, but the child had a congenital defect and died soon after birth.


When she and her sister were young women, they lived in Paris and discovered its bohemian scene. In 1931, she met artist Wolfgang Paalen and they married in 1934. With him she became involved with the Surrealism movement, published poetry under the name Alice Paalen, and met others such as Eva Sulzer, a Swiss photographer, with whom she was lifelong friends.


Her life with Paalen also introduced her to travel, which she did much of during her life. In 1933, the couple visited the cave paintings at Altamira and in 1936, she traveled to India accompanied by poet Valentine Penrose. Both of these travels had impact on her life and art, even naming two cats Vishnu and Subhashini in her late life. She traveled extensively during much of her life with later voyages to Alaska, Canada, the United States, Lebanon and in Mexico.


Rahon, Paalen and Sulzer were invited to visit Mexico by Andre and Jacqueline Breton and Frida Kahlo . They first traveled in Alaska, British Columbia and the U.S. west coast, where Paalen became fascinated by indigenous art. They finally arrived to Mexico City in 1939, at first staying in a hotel in the San Ángel neighborhood. She became friends with Frida Kahlo and Diego Rivera. With Frida she shared frustrations of a fragile body and the inability to have children as well as using art and writing to pass the time. The bond with Frida led to the later creation of a painting called La balada para Frida Kahlo. Both the couple's fascination with the country and the outbreak of World War II in 1939, prompted them to remain permanently in the country, with Rahon becoming a Mexican citizen in 1946.