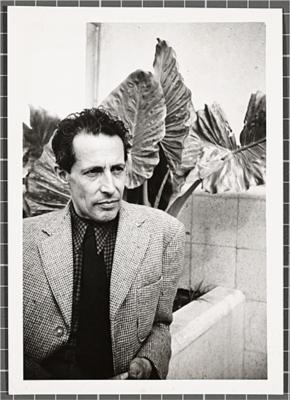 Carlos Mérida (December 2, 1891 – December 21, 1985) was a Guatemalan artist who was one of the first to fuse European modern painting to Latin American themes, especially those related to Guatemala and Mexico. He was part of the Mexican muralism movement in subject matter but less so in style, favoring a non-figurative and later geometric style rather than a figurative, narrative style. Mérida is best known for canvas and mural work, the latter including elements such as glass and ceramic mosaic on major constructions in the 1950s and 1960s. One of his major works, 4000m2 on the Benito Juarez housing complex, was completely destroyed with the 1985 Mexico City earthquake, but a monument to it exists at another complex in the south of the city.

Carlos Mérida was born Carlos Santiago Ortega in Guatemala City to Serapio Santiago Mérida and Guadalupe Ortega Barnoya. He later changed his name what is known by as he thought it was more sonorous. His brothers and children also took the Mérida name later on. He was of mixed Spanish/Maya-Quiché heritage which he promoted during his life.

As a young child, Mérida had both music and art lessons, and his first passion was music, which led to piano lessons.

From 1907 to 1909, the family went to live in the small town of Almolonga in the Quetzaltenango Department of Guatemala, where they were from. Here he continued music and art lessons.

At age 15, a malformation of his ear caused him to lose part of his hearing, so his father steered him towards painting. He felt “defeated” by music but found art to be an acceptable substitute. After he completed middle school and the family returned to Guatemala City, he entered a trade school called the Instituto de Artes y Oficios, then the Instituto de Ciencias y Letras. Here he began to have a reputation for the avant garde.

In 1919, he married Dalila Gálvez, with whom he had two daughters, Alma and Ana. She was from a wealthy family and understood Mérida’s aspirations although her parents had reservations about the marriage. She died ten years before him in 1974.

Merída’s first trip to the United States was in 1917, where he met writer Juan José Tablada. Mérida made several trips to Europe over his lifetime to both study art and work as an artist and diplomat. His early trips in the 1920s and 1930s put him in touch with both avant garde movements in Europe as well as noted Latin American artists, especially those from Mexico. His last trip was in 1950s.

In 1963, he donated canvases, graphic pieces and mural sketches to the Universidad Nacional Autónoma de México.

Mérida was one of a number of artists such as Diego Rivera and Gerardo Murillo who became committed to promoting the handcrafts and folk art of Mexico and Central America, with a particular interest in those of Guatemala, often featuring Mayan textiles or elements in their decoration in his artwork. He died in Mexico City at the age of 94 on December 21, 1985.