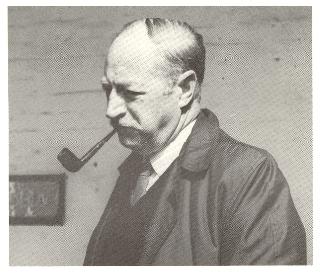 John Ferren (1905–1970) was an American artist. In his 20s, he apprenticed as a stonecutter in San Francisco, California. He is noted for his success in France as an American artist. Writer Gertrude Stein said of him "Ferren ought be a man who is interesting, he is the only American painter foreign painters in Paris consider as a painter and whose paintings interest them. He is young yet and might do . . . that thing called abstract painting."

For a short time, Ferren was an art school student in San Francisco. By the mid-1920s, Ferren was producing portrait busts. It was also around this time that he became interested in Buddhist and Eastern philosophy. By the early 1930s, he was attending the Académie Ranson, and the Sorbonne, Académie de la Grande Chaumiere. Although for the most part not formally educated, preferring to develop his art through an adventurous life style, and interaction with other artists, he was known as an intellectual among his peers. He wrote many published articles on abstract art and art theory.

While in Paris, Ferren was part of the community of artists working in Europe in the 20's and 30's, including Marcel Duchamp, Max Ernst, Hans Hofmann, Joaquín Torres-García, Alberto Giacometti, Henri Matisse, Joan Miró, Piet Mondrian, and Pablo Picasso. He became quite friendly with Picasso who mentored him, and together they stretched the canvas for Guernica, in 1937.

He returned from Europe to the United States in 1938, to live in New York City. He was a founding member (and later president) of The Club, a group of artists who were at the heart of the emerging New York School of abstract expressionism.

In the 1950s, Ferren collaborated with Alfred Hitchcock. In the movie The Trouble With Harry, the artworks of main character Sam Marlowe were painted by Ferren. In Vertigo, Ferren created the Jimmy Stewart nightmare sequence as well as the haunting Portrait of Carlotta.

Ferren was married to impressionist painter Rae (Tonkel) Ferren in 1949, who died September 6, 2016. Their son, Bran Ferren, is a noted designer, technologist, inventor, and businessman.