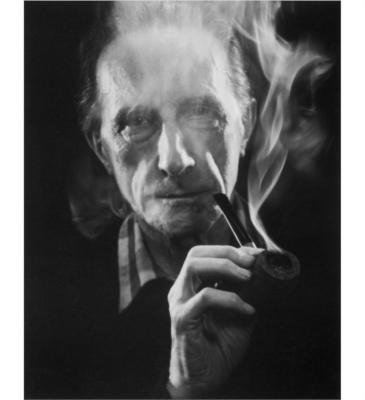 Henri-Robert-Marcel Duchamp (French: [maʁsɛl dyʃɑ̃]; 28 July 1887 – 2 October 1968) was a French-American painter, sculptor, chess player and writer whose work is associated with Cubism, conceptual art, and Dada, although he was careful about his use of the term Dada and was not directly associated with Dada groups. Duchamp is commonly regarded, along with Pablo Picasso and Henri Matisse, as one of the three artists who helped to define the revolutionary developments in the plastic arts in the opening decades of the twentieth century, responsible for significant developments in painting and sculpture. Duchamp has had an immense impact on twentieth-century and twenty first-century art; and he had a seminal influence on the development of conceptual art. By World War I, he had rejected the work of many of his fellow artists (like Henri Matisse) as "retinal" art, intended only to please the eye. Instead, Duchamp wanted to use art to serve the mind.

Marcel Duchamp was born at Blainville-Crevon in Normandy, France, and grew up in a family that enjoyed cultural activities. The art of painter and engraver Émile Frédéric Nicolle (fr), his maternal grandfather, filled the house, and the family liked to play chess, read books, paint, and make music together.

Of Eugene and Lucie Duchamp's seven children, one died as an infant and four became successful artists. Marcel Duchamp was the brother of:

As a child, with his two older brothers already away from home at school in Rouen, Duchamp was close to his sister Suzanne, who was a willing accomplice in games and activities conjured by his fertile imagination. At eight years old, Duchamp followed in his brothers' footsteps when he left home and began schooling at the Lycée Pierre-Corneille, in Rouen. Two other students in his class also became well-known artists and lasting friends: Robert Antoine Pinchon and Pierre Dumont. For the next eight years, he was locked into an educational regime which focused on intellectual development. Though he was not an outstanding student, his best subject was mathematics and he won two mathematics prizes at the school. He also won a prize for drawing in 1903, and at his commencement in 1904 he won a coveted first prize, validating his recent decision to become an artist.

He learned academic drawing from a teacher who unsuccessfully attempted to "protect" his students from Impressionism, Post-Impressionism, and other avant-garde influences. However, Duchamp's true artistic mentor at the time was his brother Jacques Villon, whose fluid and incisive style he sought to imitate. At 14, his first serious art attempts were drawings and watercolors depicting his sister Suzanne in various poses and activities. That summer he also painted landscapes in an Impressionist style using oils.

Duchamp's early art works align with Post-Impressionist styles. He experimented with classical techniques and subjects. When he was later asked about what had influenced him at the time, Duchamp cited the work of Symbolist painter Odilon Redon, whose approach to art was not outwardly anti-academic, but quietly individual.

He studied art at the Académie Julian from 1904 to 1905, but preferred playing billiards to attending classes. During this time Duchamp drew and sold cartoons which reflected his ribald humor. Many of the drawings use verbal puns (sometimes spanning multiple languages), visual puns, or both. Such play with words and symbols engaged his imagination for the rest of his life.