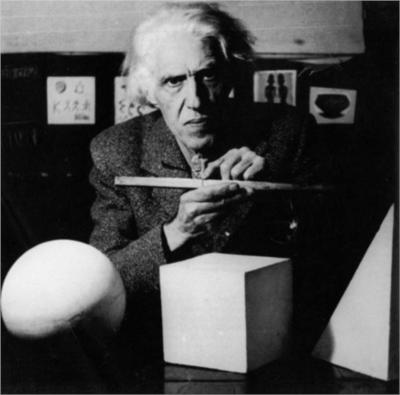 Torres-Garcia is one of the great figures of the art of this century, an avant gardist whose influence encompasses European, American and South American modern art. He solved the eternal dilemma between the old and the modern, the classical and the avant-garde, reason and feeling, figuration and abstraction with a simple and brilliant metaphor: there is no contradiction or incompatibility. The same brush strokes serve for a primitive composition or for a mural of Renaissance inspiration. Like Goethe, he seeks the integration between classicism and modernity.

He is known for his collaboration with Gaudi in 1903 on the stained glass windows for the Palma Cathedral and the Sagrada Família. He decorated with monumental frescoes the medieval Palau de la Generalitat seat of the Catalan government. His art is associated to archaic universal cultures; Mediterranean cultural traditions, Noucentisme, and Modern Classicism. A founder of Modern Art, he developed unique languages encompassing Cubism, Dada, Neo plasticisme, Primitivisme, Surrealisme, Abstraction, Geometry; inventor of Universal Constructivism,

As a theoretician he published more than one hundred and fifty books, essays and articles written in Catalan, Spanish, French, English; "admirable treaties on aesthetics and avant-garde literature.", In his lifetime he gave more than 500 lectures. An indefatigable teacher who founded several art schools one in Spain and another in Montevideo and numerous art groups including the first European abstract art group and magazine Cercle et Carré (Circle and square) in Paris in 1929. Among the many artists that have called him "Maestro" (teacher) are Joan Miró, Helion, Pere Daura, Engel Rozier.

Retrospectives in Paris in 1955 and Amsterdam in 1961 are the earliest to document historically the place of Torres-Garcia in the currents of abstract art. In the United States he had important exhibitions in the 1920s, in the 1930s at Gallatin's Gallery of Living Art as a master of the European Modern Art with Arp, Braque, Gris, Picasso.

Joaquín Torres-García was born in Montevideo, Uruguay on 28 July 1874. The first child of Joaquim Torras Fradera (son of Joan Torras and Rosa Fradera), an emigrant from Mataró, Spain, and María García Pérez (daughter of José María García, from the Canary Islands, and Misia Rufina Pérez, Uruguayan). He grew up in his father's general store called the Almacen de Joaquín Torres. As a child, Torres "examined the picturesque store situated in the old Square of the Wagons, the arrival point of the raw material of the country for export to Europe. The colonial Montevideo had a port, trains, and a vibrant population dotted with countless gauchos wrapped in capes with whip ready in hand." "Much of his early education in that predominantly agricultural society came from his observation of the things around him ... He received his first formal art training when his family returned to Spain"