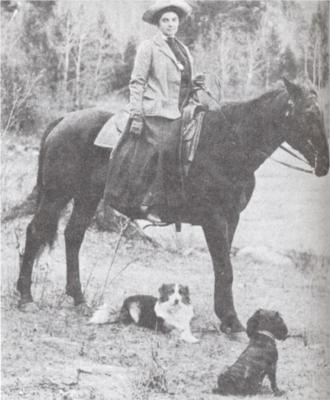 Emily Carr is considered to be a major Canadian artist for her depiction of the landscapes of Pacific Northwest and its aboriginal culture. Being one of the pioneers of Modernist and Post-Impressionist styles of painting in Canada, she was not recognized until late in her life.

Carr was born in Victoria, British Columbia in 1871. Her inclination to art was duly encouraged by her father, Richard Carr, a wholesale merchant. After the death of both her parents in 1890, she started to pursue art seriously, and studied at the San Francisco Art Institute for two years. At the age of 26, Carr visited a small village near Ucluelet located on the western coast of the Vancouver Island. There she sketched the lives of the Nootka people, indigenous to the land. Her interest in the lifestyle of Indian people was promoted by her trip to Alaska, where she spent days sketching the daily activities of the villagers.

In 1899, Carr went to the UK to study at the Westminster School of Art in London. In England she befriended and worked with Julius Olsson and Algernon Talmage, artists of the St. Ives School. By the time she returned to Canada, Carr established herself as a professional artist. She worked as a teacher at the Ladies Art Club in Vancouver, where she was highly unpopular among the students due to her smoking habits and cursing, that eventually led her to resign from her job.

After her tryst with many Indian villages in the Queen Charlotte Islands and the Upper Skeena River, Carr once again went to Europe in 1910, to study at the Académie Colarossi in Paris. She also took private lessons from Harry Phelan Gibb who influenced her palette adding there more vibrant colors. She was also influenced by French Post-Impressionism and Fauvism, and, after returning back to Canada in 1912, she exhibited 70 oils and watercolors of her “french period”, showing those influences. However, her bold new style was not appreciated by Canadians.

During the next 15 years, Carr did not paint much. She run a boarding house, took a short-story writing course, and spent some time in San Francisco doing different jobs, like painting decorations for the St. Francis Hotel and drawing cartoons for Western Woman’s Weekly. In 1927 Carr attended an exhibition of West Coast Aboriginal art in National Gallery of Canada. There she met Lawren Harris and other members of the Group of Seven, the most recognized modern painters in Canada at that time. Their distinctively Canadian art impressed her greatly, and triggered the most prolific period of her creative career. Throughout the decade, she mastered the scenes from the daily lives, traditions and culture of the indigenous Americans. With Lawren Harris as her mentor, Carr began to paint bold, almost hallucinatory canvases with which many people identify her - paintings of Aboriginal totem poles set in deep forest locations or the sites of abandoned Indigenous villages.

After a year or two Carr left Aboriginal subjects to devote herself to nature themes. From 1928 on, critical recognition and exposure in exhibitions of more than regional significance, like the National Gallery of Canada and the American Federation of Artists in Washington, D.C., began to come her way. There was even the occasional sale, though never enough to improve her financial situation. In full mastery of her talents and with deepening vision, she continued to produce a great body of paintings freely expressive of the large rhythms of Western forests, driftwood-tossed beaches and expansive skies, like Indian Church (1929), Loggers’ Culls (1935), and Heart of the Forest (1935).

In 1937, Carr suffered her first heart attack, which marked the beginning of a decline in her health and a lessening of the energy required for painting. Artworks from her last decade, like Odds and Ends (1939), reveal her growing anxiety about the environmental impact of industry on British Columbia's landscape and on the lives of Indigenous people. Carr died in 1945 of a heart attack. More than half a century after her death, she has become a Canadian icon. Her long preoccupation with the Indigenous culture of the Canadian west coast coincided with the beginnings of a rising tide of awareness and confident self-identification on the part of Aboriginal people who had for some time been considered part of a moribund culture. In the same way, her passionate involvement with nature and its portrayal coincided with a growing popular awareness of environmental issues and an accompanying sense of loss associated with the disappearance of "nature" in our own day. And the fact that she was a woman fighting the overwhelming obstacles that faced women of her day to become an artist of stunning originality and strength has made her a favorite of the women's movement.

Emily Carr (December 13, 1871 – March 2, 1945) was a Canadian artist and writer inspired by the Indigenous peoples of the Pacific Northwest Coast. As one of the first painters in Canada to adopt a Modernist and Post-Impressionist painting style, Carr did not receive widespread recognition for her work until late in her life. As she matured, the subject matter of her painting shifted from aboriginal themes to landscapes—forest scenes in particular. As a writer, Carr was one of the earliest chroniclers of life in British Columbia. The Canadian Encyclopedia describes her as a "Canadian icon".

Born in Victoria, British Columbia, in 1871, the year British Columbia joined Canada, Emily Carr was the second-youngest of nine children born to English parents Richard and Emily (Saunders) Carr. The Carr home was on Birdcage Walk (now Government Street), in the James Bay district of Victoria, a short distance from the legislative buildings (nicknamed the 'Birdcages') and the town itself.

The Carr children were raised on English tradition. Richard Carr, born in England, believed it was sensible to live on Vancouver Island, a colony of Great Britain, where he could practice English customs and continue his British citizenship. The family home was made up in lavish English fashion, with high ceilings, ornate mouldings, and a parlour. Carr was taught in the Presbyterian tradition, with Sunday morning prayers and evening Bible readings. Richard Carr called on one child per week to recite the sermon, and Emily consistently had trouble reciting it.

Carr's father encouraged her artistic inclinations, but it was only in 1890, after her parents' deaths, that Carr pursued her art seriously. She studied at the San Francisco Art Institute for two years (1890–1892) before returning to Victoria. In 1899 Carr traveled to London, where she studied at the Westminster School of Art. Carr also visited the Nootka Indian mission at Ucluelet on the west coast of Vancouver Island in 1899. She traveled also to a rural art colony in St Ives, Cornwall, returning to British Columbia in 1905. Carr took a teaching position in Vancouver at the 'Ladies Art Club' that she held for no longer than a month – she was unpopular amongst her students due to her rude behaviour of smoking and cursing at them in class, and the students began to boycott her courses.

In 1898, at age 27, Carr made the first of several sketching and painting trips to aboriginal villages. She stayed in a village near Ucluelet on the west coast of Vancouver Island, home to the Nuu-chah-nulth people, then commonly known to English-speaking people as 'Nootka'. Carr recalled that her time in Ucluelet made "a lasting impression on me". Her interest in indigenous life was reinforced by a trip to Alaska nine years later with her sister Alice. In 1912, Carr took a sketching trip to Indian villages in the Queen Charlotte Islands, the Upper Skeena River, and Alert Bay.

Determined to further her knowledge of the age's evolving artistic trends, in 1910 Carr returned to Europe to study at the Académie Colarossi in Paris. In Montparnasse with her sister Alice, Emily Carr met modernist painter Harry Gibb with a letter of introduction. Upon viewing his work, she and her sister were shocked and intrigued by his use of distortion and vibrant colour; she wrote: "Mr Gibb's landscapes and still life delighted me — brilliant, luscious, clean. Against the distortion of his nudes I felt revolt." Carr's study with Gibb and his techniques shaped and influenced her style of painting, and she adopted a vibrant colour palette rather than continuing with the pastel colours of her earlier British training.