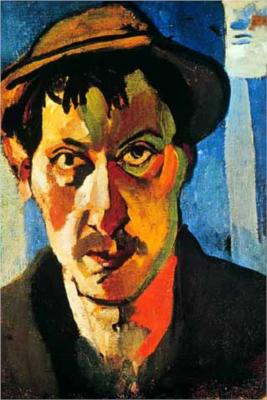 Self-Portrait with a Hat - Andre Derain

André Derain is best known for his contributions to the developments of Fauvism and Cubism, two avant-garde movements from the beginning of the 20th century. Derain was born on June 17, 1880 in Chatou, just outside of Paris. He began his training by attending painting classes under French symbolist, Eugène Carrière at the Académie Carriere (1898-1899). While at school, he befriended Henri Matisse, and in 1900, he met Maurice de Vlaminck, with whom he later shared a studio. The three often painted together, and were instrumental figures in each other’s artistic development.

Derain spent the summer of 1905 with Matisse in Collioure, a small village in the South of France. This was a pivotal period for the artist: he explored techniques of Impressionism and Post-Impressionism and produced paintings such as Mountains at Collioure (1905) and Boats of Collioure (1905). These landscapes assimilated an impressionist subject with a divisionist technique, and the bold color palettes of Van Gogh and Gauguin. Derain showed many of his new paintings at the 1905 exhibition Salon d’Automne (Autumn Salon). After seeing the show the art critic Louis Vauxcelle called Derain, Matisse and others from their circle ‘Fauves’ (‘wild beasts’ in French), thus marking the establishment of Fauvism. The name ‘Fauve’ reflected a mixed impression; it recognized the vibrancy and unrestrained energy of their paintings but also expressed a sense of shock and apprehension.

The Parisian art dealer, Ambroise Vollard took notice of Derain’s talents and sent him to paint several views of London. During his three visits to London (between March 1906 and February 1907), Derain painted some of his most revered paintings like Charing Cross Bridge, London (1906) and The Pool of London (1906). In the following years, Derain’s style was eclectic, and his innovation stemmed from his ability to meld different sources of inspiration. For instance in The Dance (1906), he combined the influences of Paul Gauguin, Romanesque sculpture and East Asian art. Derain’s broad range of influences and references related to his love of galleries and museums – he frequented French museums and was very familiar with their collections. From 1907, the most dominant influence for Derain was Paul Cézanne. By 1908, he broke away from Fauvism, focusing on angled forms modeled after Cézanne and a more muted color palette. Paintings like Bathers (ca. 1908) and Landscape near Martigues (1908) reflected the influence of Cézanne, but also Derain’s own strides towards a Cubist style.

With the outbreak of World War I, Derain was mobilized for military service and had little opportunity to paint until his release in 1919. After his return, Derain began reflecting on the works of Old Masters and positioned himself as a leader of a renewed classicism. In Madame Derain in a white shawl (ca. 1919-1920) for example, Derain adopted compositional and stylistic elements from the early Italian Renaissance art. Derain believed that art should ‘equalize time’, meaning that all great art regardless of its superficial form deals with the universal truths that shape the human experience. Derain’s style remained consistent until his death in 1954.

Derain was born in 1880 in Chatou, Yvelines, Île-de-France, just outside Paris. In 1895 Derain began to study on his own, contrary to claims that meeting Vlaminck or Matisse began his efforts to paint, and occasionally went to the countryside with an old friend of Cézanne's, Father Jacomin along with his two sons. In 1898, while studying to be an engineer at the Académie Camillo, he attended painting classes under Eugène Carrière, and there met Matisse. In 1900, he met and shared a studio with Maurice de Vlaminck and together they began to paint scenes in the neighbourhood, but this was interrupted by military service at Commercy from September 1901 to 1904. Following his release from service, Matisse persuaded Derain's parents to allow him to abandon his engineering career and devote himself solely to painting; subsequently Derain attended the Académie Julian.

Derain and Matisse worked together through the summer of 1905 in the Mediterranean village of Collioure and later that year displayed their highly innovative paintings at the Salon d'Automne. The vivid, unnatural colors led the critic Louis Vauxcelles to derisively dub their works as les Fauves, or "the wild beasts", marking the start of the Fauvist movement. In March 1906, the noted art dealer Ambroise Vollard sent Derain to London to produce a series of paintings with the city as subject. In 30 paintings (29 of which are still extant), Derain presented a portrait of London that was radically different from anything done by previous painters of the city such as Whistler or Monet. With bold colors and compositions, Derain painted multiple pictures of the Thames and Tower Bridge. These London paintings remain among his most popular work. Art critic T.G Rosenthal: "Not since Monet has anyone made London seem so fresh and yet remain quintessentially English. Some of his views of the Thames use the Pointillist technique of multiple dots, although by this time, because the dots have become much larger, it is rather more simply the separation of colours called Divisionism and it is peculiarly effective in conveying the fragmentation of colour in moving water in sunlight."

In 1907 art dealer Daniel-Henry Kahnweiler purchased Derain's entire studio, granting Derain financial stability. He experimented with stone sculpture and moved to Montmartre to be near his friend Pablo Picasso and other noted artists. Fernande Olivier, Picasso's mistress at the time, described Derain as:

At Montmartre, Derain began to shift from the brilliant Fauvist palette to more muted tones, showing the influence of Cubism and Paul Cézanne. (According to Gertrude Stein, there is a tradition that Derain discovered and was influenced by African sculpture before the Cubists did.) Derain supplied woodcuts in primitivist style for an edition of Guillaume Apollinaire's first book of prose, L'enchanteur pourrissant (1909). He displayed works at the Neue Künstlervereinigung in Munich in 1910, in 1912 at the secessionist Der Blaue Reiter and in 1913 at the seminal Armory Show in New York. He also illustrated a collection of poems by Max Jacob in 1912.