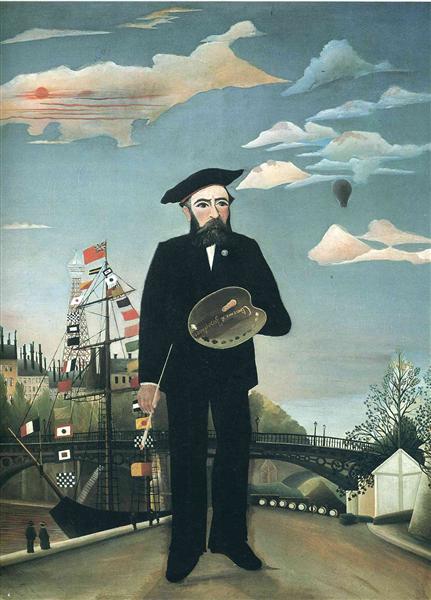 Primitivism is a Western art movement that borrows visual forms from non-Western or prehistoric peoples, such as Paul Gauguin's inclusion of Tahitian motifs in paintings and ceramics. Borrowings from primitive art has been important to the development of modern art.

The term "primitivism" is often applied to other professional painters working in the style of naïve or folk art like Henri Rousseau, Mikhail Larionov, Paul Klee and others.

Whether and to what extent we should simplify our lives and get "back to basics" is a debate that has been going on since the invention of writing. In antiquity the superiority of the simple life was expressed in the Myth of the Golden Age, depicted in the genre of European poetry and visual art known as the Pastoral. The debate about the merits and demerits of a simple, versus a complex life, gained new urgency with the European encounter with hitherto unknown peoples after the exploration of the Americas and Pacific Islands by Columbus and others.

During the Enlightenment, arguments about the supposed superiority of indigenous peoples were chiefly used as a rhetorical device to criticize aspects of European society. In the realm of aesthetics, however, the eccentric Italian philosopher, historian and jurist Giambattista Vico (1688–1744) was the first to argue that primitive man was closer to the sources of poetry and artistic inspiration than "civilized" or modern man. Vico was writing in the context of the celebrated contemporary debate, known as the great Quarrel of the Ancients and the Moderns, over which was better, the classic poetry of Homer and the Bible or modern vernacular literature.

In the 18th century, the German scholar Friedrich August Wolf identified the distinctive character of oral literature and located Homer and the Bible as examples of folk or oral tradition (Prolegomena to Homer, 1795). Vico and Wolf's ideas were developed further in the beginning of the 19th century by Herder. Nevertheless, although influential in literature, such arguments were known to a relatively small number of educated people and their impact was limited or non-existent in the sphere of visual arts.

The 19th century saw for the first time the emergence of historicism, or the ability to judge different eras by their own context and criteria. A result of this new historicism, new schools of visual art arose that aspired to hitherto unprecedented levels of historical fidelity in setting and costumes. Neoclassicism in visual art and architecture was one result. Another such "historicist" movement in art was the Nazarene movement in Germany, which took inspiration from the so-called Italian "primitive" school of devotional paintings (i.e., before the age of Raphael and the discovery of oil painting).

Where conventional academic painting (after Raphael) used dark glazes, highly selective, idealized forms, and rigorous suppression of details, the Nazarenes used clear outlines, bright colors, and paid meticulous attention to detail. This German school had its English counterpart in the Pre-Raphaelites, who were primarily inspired by the critical writings of John Ruskin, who admired the painters before Raphael (such as Botticelli) and who also recommended painting outdoors, hitherto unheard of.