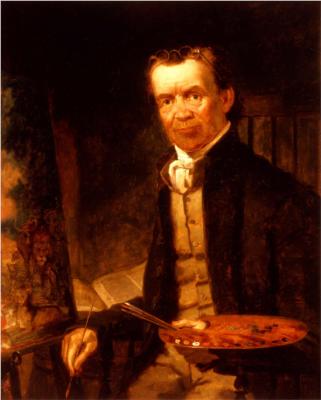 Edward Hicks (April 4, 1780 – August 23, 1849) was an American folk painter and distinguished religious minister of the Society of Friends (aka "Quakers"). He became a Quaker icon because of his paintings.

Edward Hicks was born in his grandfather's mansion at Attleboro (now Langhorne), in Bucks County, Pennsylvania. His parents were Anglican. Isaac Hicks, his father, was a Loyalist who was left without any money after the British defeat in the Revolutionary War. After young Edward's mother died when he was eighteen months old, Matron Elizabeth Twining – a close friend of his mother's – raised him as one of her own at their farm, known as the Twining Farm. He apparently also resided at the David Leedom Farm. She also taught him the Quaker beliefs, which had a great effect on the rest of his life.

At the age of thirteen Hicks began an apprenticeship to coach makers William and Henry Tomlinson. He stayed with them for seven years, during which he learned the craft of coach painting. In 1800 he left the Tomlinson firm to earn his living independently as a house and coach painter, and in 1801 he moved to Milford to work for Joshua C. Canby, a coach maker.

At this stage of his life Hicks was, as he later wrote in his memoirs, "in my own estimation a weak, wayward young man ... exceedingly fond of singing, dancing, vain amusements, and the company of young people, and too often profanely swearing". Dissatisfied with his life, he started to attend Quaker meetings regularly, and in 1803 he was accepted for membership in the Society of Friends. Later that same year he married a Quaker woman named Sarah Worstall.

In 1812 his congregation recorded him as a minister, and by 1813 he began traveling throughout Philadelphia as a Quaker preacher. To meet the expenses of traveling, and for the support of his growing family, Hicks decided to expand his trade to painting household objects and farm equipment as well as tavern signs. His painting trade was lucrative, but it upset some in the Quaker community, because it contradicted the plain customs they respected. In 1815 Hicks briefly gave up ornamental painting and attempted to support his family by farming, while also continuing with the plain, utilitarian type of painting that his Quaker neighbors thought acceptable. His financial difficulties only increased, as utilitarian painting was less remunerative, and Hicks did not have the experience he needed to cultivate the land, or run a farm primarily on his own.

By 1816, his wife was expecting a fifth child. After a relative of Hicks, at the urging of Hicks' close friend John Comly, talked to him about painting again, Hicks resumed decorative painting. This friendly suggestion saved Hicks from financial disaster, and preserved his livelihood not as a Quaker Minister but as a Quaker artist. Around 1820, Hicks made the first of his many paintings of The Peaceable Kingdom. Hicks' easel paintings were often made for family and friends, not for sale, and decorative painting remained his main source of income.