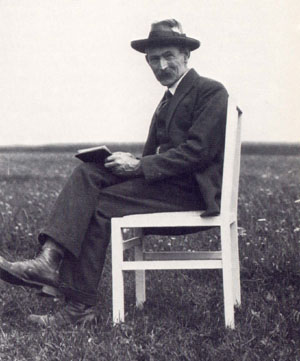 Adolf Dietrich (November 9, 1877 – June 4, 1957) was a Swiss labourer and, as one of the most renowned naïve artists, one of the leading Swiss painters of the 20th century.

Adolf Dietrich was born to poor farmers in the canton of Thurgau as the youngest of seven children. Upon discovering his exceptional graphical talents, his schoolteacher suggested that he become a lithographer. His parents, however, refused: their youngest son was needed as a farmhand.

Dietrich would remain in the house of his parents, as a bachelor, for the rest of his life. Because the small farm provided little income, he had to work as a home worker and as a day labourer in a local textile mill as well as in the woods. Only on Sundays was he free to engage in drawing and painting. His first sketchbook dates to 1896, his first paintings to 1900. He created his works without any training or examples; but he did heed the advice of passing landscape painters to trust in his powers of observation.

For years, Dietrich tried without success to have his works shown in public. After his works were first shown in Konstanz in 1913, he received some recognition in Germany, where he was associated with the Neue Sachlichkeit movement and called the "German Rousseau". In 1924, Dietrich was able to cease his home work thanks to the still meager income provided by the sale of his works in Germany.

The income from Germany ceased with the Nazi Machtergreifung in 1933 and the flight of his Jewish art dealer, Herbert Tannenbaum. However, Swiss museums and galleries were now slowly growing interested in Dietrich, and his international breakthrough came in 1937–38, when the exposition Les maîtres populaires de la réalité in Paris, Zürich und New York City fêted him as the principal representative of naïve art.

Dietrich retained his modest lifestyle in the face of sudden fame and demand for his works. He was, however, industrious in marketing the output of the "master painter of Berlingen", as he now called himself. At times, he used (upon his clients' wishes) cardboard templates for the serial reproduction of particularly popular motives. Only Dietrich's few late works prior to his death in 1957 indicated any stylistic development.

The motives of Dietrich's works are limited to his immediate surroundings in Berlingen, and include rural landscapes, animals, people and still lifes. He created all of his works at home in his room, using pencil sketches, self-made photographs, stuffed animals and books as models. Drawing on his powers of observation, Dietrich imbued his still lifes and animal paintings with a strong sense of materiality and executed them with what was for an untrained painter an exceptional precision. His images of people and scenes of the imagination, on the other hand, appear comparatively plain or even awkward.

The artistic merits of Dietrich's works are found in his strong intuitive sense of colour, which intensifies the impact of his brightly coloured works, and in his outstanding power of observation, which allowed him to combine precision with great attentiveness of his subjects.