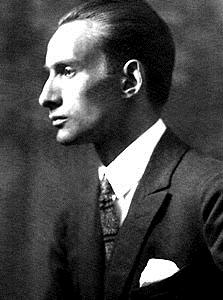 Christian Schad (August 21, 1894 – February 25, 1982) was a German painter associated with Dada and the New Objectivity movement. Considered as a group, Schad's portraits form an extraordinary record of life in Vienna and Berlin in the years following World War I.

Schad was born in Miesbach, Upper Bavaria, to a prosperous lawyer who supported him for nearly half his life. He studied at the art academy in Munich in 1913. A pacifist, he fled to Switzerland in 1915 to avoid service in World War I, settling first in Zurich and then in Geneva. Both cities were centers of the Dada movement, and Schad became a Dadaist. In Zurich, he met Dadaists like Hans Arp and Hugo Ball, and also Walter Serner, with whom he launched Sirius, a literary review. He was witness of the foundation of the famous Cabaret Voltaire. Beginning in 1918, while living in Geneva, Schad created his own version of the Photogram (which later was named "Schadographs" by Tristan Tzara) where a contour picture is developed on chloride printing-out paper. From 1920 to 1925, he spent some years in Rome and Naples. Having married Marcella Arcangeli, the daughter of a Roman professor, he settled in Naples where he attended painting and drawing courses at the art academy. In 1927 the family emigrated to Vienna. His paintings of this period are closely associated with the New Objectivity Movement. In the late twenties, he returned to Berlin and settled there.

Schad's art was not condemned by the Nazis in the way that the work of Otto Dix, George Grosz, Max Beckmann, and many other artists of the New Objectivity movement was; this may have been because of his lack of commercial success or because his work appeared superficially neo-classical. He became interested in Eastern philosophy around 1930, and his artistic production declined precipitously. After the crash of the New York stock market in 1929, Schad could no longer rely on his father's financial support, and he largely stopped painting in the early 1930s In 1937, unknown to him, the Museum of Modern Art showed three Schadographs, given by Tristan Tzara, in a show about Dada and Surrealism. The same year, Nazis included Schad in Great German Art, their antidote to the Degenerate Art show.

Schad lived in obscurity in Germany through the war and after it. After the destruction of his studio in 1943 Schad moved to Aschaffenburg. The city commissioned him to copy Matthias Grünewald's Virgin and Child (Stuppach, parish church), a project on which he worked until 1947. When his Berlin studio was destroyed in aerial bombing, his future wife Bettina saved the artworks in a spectacular action and brought them to him to Aschaffenburg. An initially provisional arrangement turned into a stay of four decades. Schad continued to paint in the 1950s in Magic Realist style and returned in the 1960s to experiments with photograms. Schad's reputation did not begin to recover until the 1960s, when a couple of shows in Europe dovetailed with the rise of Photorealism.