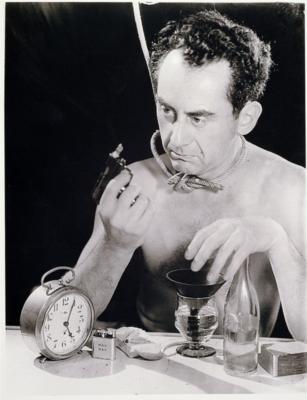 Man Ray's career is distinctive above all for the success he achieved in both the United States and Europe. First maturing in the center of American modernism in the 1910s, he made Paris his home in the 1920s and 1930s, and in the 1940s he crossed the Atlantic once again, spending periods in New York and Hollywood. His art spanned painting, sculpture, film, prints and poetry, and in his long career he worked in styles influenced by Cubism, Futurism, Dada and Surrealism. He also successfully navigated the worlds of commercial and fine art, and came to be a sought-after fashion photographer. He is perhaps most remembered for his photographs of the inter-war years, in particular the camera-less pictures he called 'Rayographs', but he always regarded himself first and foremost as a painter.

Although he matured as an abstract painter, Man Ray eventually disregarded the traditional superiority painting held over photography and happily moved between different forms. Dada and Surrealism were important in encouraging this attitude; they also persuaded him that the idea motivating a work of art was more important than the work of art itself.

For Man Ray, photography often operated in the gap between art and life. It was a means of documenting sculptures that never had an independent life outside the photograph, and it was a means of capturing the activities of his avant-garde friends. His work as a commercial photographer encouraged him to create fine, carefully composed prints, but he would never aspire to be a fine art photographer in the manner of his early inspiration, Alfred Stieglitz.

André Breton once described Man Ray as a 'pre-Surrealist', something which accurately describes the artist's natural affinity for the style. Even before the movement had coalesced, in the mid 1920s, his work, influenced by Marcel Duchamp, had Surrealist undertones, and he would continue to draw on the movement's ideas throughout his life. His work has ultimately been very important in popularizing Surrealism.

Man Ray (born Emmanuel Radnitzky; August 27, 1890 – November 18, 1976) was an American visual artist who spent most of his career in France. He was a significant contributor to the Dada and Surrealist movements, although his ties to each were informal. He produced major works in a variety of media but considered himself a painter above all. He was best known for his photography, and he was a renowned fashion and portrait photographer. Man Ray is also noted for his work with photograms, which he called "rayographs" in reference to himself.

During his career as an artist, Man Ray allowed few details of his early life or family background to be known to the public. He even refused to acknowledge that he ever had a name other than Man Ray.

Man Ray's birth name was Emmanuel Radnitzky in South Philadelphia, Pennsylvania, US, in 1890. He was the eldest child of Russian Jewish immigrants Max, a tailor, and Minnie Radnitzky. He had a brother, Sam, and two sisters, Dora and Essie, the youngest born in 1897 shortly after they settled in the Williamsburg neighborhood of Brooklyn, New York. In early 1912, the Radnitzky family changed their surname to Ray. Man Ray's brother chose the surname in reaction to the ethnic discrimination and antisemitism prevalent at the time. Emmanuel, who was called "Manny" as a nickname, changed his first name to Man and gradually began to use Man Ray as his name.

Man Ray's father worked in a garment factory and ran a small tailoring business out of the family home. He enlisted his children to assist him from an early age. Man Ray's mother enjoyed designing the family's clothes and inventing patchwork items from scraps of fabric. Man Ray wished to disassociate himself from his family background, but their tailoring left an enduring mark on his art. Mannequins, flat irons, sewing machines, needles, pins, threads, swatches of fabric, and other items related to tailoring appear in almost every medium of his work. Art historians have noted similarities between Ray's collage and painting techniques and styles used for tailoring.

Mason Klein, curator of a Man Ray exhibition at the Jewish Museum, titled Alias Man Ray: The Art of Reinvention, suggests that the artist may have been "the first Jewish avant-garde artist."

Man Ray was the uncle of the photographer Naomi Savage, who learned some of his techniques and incorporated them into her own work.

Man Ray displayed artistic and mechanical abilities during childhood. His education at Brooklyn's Boys' High School from 1904 to 1909 provided him with solid grounding in drafting and other basic art techniques. While he attended school, he educated himself with frequent visits to the local art museums, where he studied the works of the Old Masters. After his graduation, Ray was offered a scholarship to study architecture but chose to pursue a career as an artist. Man Ray's parents were disappointed by their son's decision to pursue art, but they agreed to rearrange the family's modest living quarters so that Ray's room could be his studio. The artist remained in the family home over the next four years. During this time, he worked steadily towards becoming a professional painter. Man Ray earned money as a commercial artist and was a technical illustrator at several Manhattan companies.