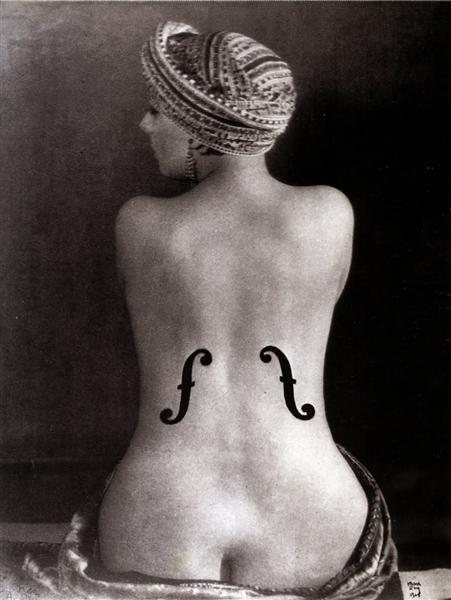 Inspired by Jean-Auguste-Dominique Ingres's La Grande Baigneuse, Ray used Kiki de Montparnasse wearing a turban as a model for this piece. He transformed the female body into a musical instrument by painting sound-holes on her back, playing with the idea of objectification of an animate body. Throughout his career Man Ray was fascinated with juxtaposing an object with a female body.
Ingres's works were admired by many surrealist artists, including Ray, for his representation of distorted female figures. Ingres's well-known passion for the violin created the colloquialism in French, 'violon d'Ingres', meaning a hobby. Many describe Le Violon d'Ingres as a visual pun, depicting his muse, Kiki, as Ray's 'violon d'Ingres.'
This image is one of many of Man Ray's photographs that have gone on to have a rich afterlife in popular culture. F-holes have become a popular tattoo design amongst musicians, and fashion designers like Viktor and Rolf referenced the image to create their spring 2008 collection.