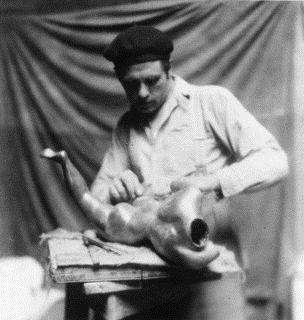 Leon Underwood (born 25 December 1890 in Shepherds Bush, London, died 9 October 1975) "The precursor of modern sculpture in Britain" was a noted British sculptor, painter, draughtsman and engraver as well as a writer and illustrator, scholar, teacher, philosopher and stained glass and furniture craftsman. He attended the Slade School of Art and founded the magazine The Island in 1931. His work was influenced by African and Cycladic designs.

In the First World War, Underwood worked with Solomon Joseph Solomon as a camoufleur, creating observation posts camouflaged as trees. He sketched and painted examples of his wartime work, as in his oil painting Erecting a Camouflage Tree (1919). In 1920 he received the British Prix de Rome but chose not to go to Italy, instead opening his own drawing school, then travelling elsewhere through most of the decade.

Underwood is best known for his sculptures cast in bronze, carvings in marble, stone and wood and his drawings. His lifetime's work however includes a wide range of mediums and activities, and an expressive and technical mastery in what was at the time a ground breaking approach. His paintings included portraits and Mexican landscapes resulting from his youthful travels there. He was a friend of Ralph Chubb with whom he sometimes collaborated and exhibited.

He wrote a number of books on ancient African sculpture, including a study of the Ife and Benin heads, Bronzes of West Africa which show his pioneering appreciation of their artistic significance and his understanding of their relationship to the culture and technology from which they originated. His access to the cave paintings of Altamira in Spain ignited his "New Philosophy" with regard to this interelationship of the expressiveness and technology of primitive art.

Among his students was Henry Moore, who later spoke of his indebtedness to Underwood's teaching. Underwood however was always convinced that subject matter formed a fundamental role behind the power of both his own and primitive art, and had no belief in subject-less or purely abstract form in his own work. Other notable students, only a little younger than Underwood, include Gertrude Hermes and Blair Hughes-Stanton.

Underwood set up the Brook Green School, Hammersmith, London in the studio where he personally cast his bronzes, sculpted his carvings and propagated his ideas about primitive sculpture as "...forms created by inspired belief...". The art historian John Rothenstein wrote of him in an introduction to a retrospective exhibition of his bronzes at The Minories, Colchester in 1969 "...the most versatile artist at work in Britain today..." but added a quotation of the artist: "The ravens fed me".

Underwood was married to Mary Coleman. They had two sons, Garth (a zoologist) and John, and one daughter, Jean.