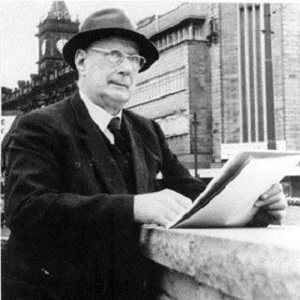 Laurence Stephen Lowry RBA RA (1 November 1887 – 23 February 1976) was an English artist. Many of his drawings and paintings depict Pendlebury, Lancashire, where he lived and worked for more than 40 years, and also Salford and its surrounding areas.

Lowry is famous for painting scenes of life in the industrial districts of North West England in the mid-20th century. He developed a distinctive style of painting and is best known for his urban landscapes peopled with human figures often referred to as "matchstick men". He painted mysterious unpopulated landscapes, brooding portraits and the unpublished "marionette" works, which were only found after his death.

Due to his use of stylized figures and the lack of weather effects in many of his landscapes he is sometimes characterized as a naïve "Sunday painter", although this is not the view of the galleries that have organised retrospectives of his works.

A large collection of Lowry's work is on permanent public display in The Lowry, a purpose-built art gallery on Salford Quays named in his honour. Lowry rejected five honours during his life, including a knighthood in 1968, and consequently holds the record for the most rejected British honours. On 26 June 2013 a major retrospective opened at the Tate Britain in London, his first at the Tate, and in 2014 his first solo exhibition outside the UK was held in Nanjing, China.

Lowry was born on 1 November 1887 at 8 Barrett Street, Stretford, which was then in Lancashire. It was a difficult birth, and his mother Elizabeth, who hoped for a girl, was uncomfortable even looking at him at first. Later she expressed envy of her sister Mary, who had "three splendid daughters" instead of one "clumsy boy". Lowry's father Robert, who was of northern Irish descent, worked as a clerk for the Jacob Earnshaw and Son Property Company and was a withdrawn and introverted man. Lowry once described him as "a cold fish" and "(the sort of man who) realised he had a life to live and did his best to get through it."

After Lowry's birth, his mother's health was too poor for her to continue teaching. She is reported to have been talented and respected, with aspirations of becoming a concert pianist. She was an irritable, nervous woman brought up to expect high standards by her stern father. Like him, she was controlling and intolerant of failure. She used illness as a means of securing the attention and obedience of her mild and affectionate husband and she dominated her son in the same way. Lowry maintained, in interviews conducted later in his life, that he had an unhappy childhood, growing up in a repressive family atmosphere. Although his mother demonstrated no appreciation of her son's gifts as an artist, a number of books Lowry received as Christmas presents from his parents are inscribed to "Our dearest Laurie". At school he made few friends and showed no academic aptitude. His father was affectionate towards him but was, by all accounts, a quiet man who was at his most comfortable fading into the background as an unobtrusive presence.