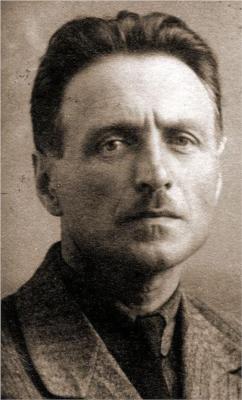 Mykhailo Boychuk (Ukrainian: Миха́йло Льво́вич Бойчу́к, 30 October 1882 - 13 July 1937) was an Ukrainian painter, most commonly known as a monumentalist. He is considered a representative of the generation of the Executed Renaissance.

Boychuk was born in Romanivka, then in Austria-Hungary, and currently in Ternopil Oblast of Ukraine. He studied painting under Yuliaan Pankevych in Lviv, and subsequently in Kraków, Vienna, and Munich. Between 1907 and 1910 he lived in Paris, where in 1909 he founded his own studio-school. The group of Ukrainian artists who studied and worked with him was known as the Boychukists. In 1910, Boychuk returned to Lviv, where he worked as a conservator at the National Museum. In 1911, he travelled to the Russian Empire, but, after World War I started, he was interned there as an Austrian citizen. After the war, Boychuk remained in Kiev.

In 1917, he became one of the founders of the Ukrainian State Academy of Arts, where he taught fresco and mosaic, and in 1920 was a rector. In 1925, he co-founded the Association of Revolutionary Art of Ukraine. At the time, he already performed a number of high-profile monumental works, and formed a school of monumental painters which existed until his death. The school included renowned artists such as his brother Timofey Boychuk and Ivan Padalka.

Dueing the Great Purge, the Association of Revolutionary Art of Ukraine was disestablished, and Boychuk was executed. His wife, Sofiia Nalepinska, also an artist, was executed several months after Boychuk.

Right after the 1917 October Revolution, Boychuk and a group of students after his direction made frescoes for the Kiev Theater of Opera and Ballet (1919), the Kharkiv Opera Theater (1921), the Ukrainian SSR's pavilion at the First All-Russian Cottage Industry and Agriculture Exhibition in Moscow, and the Kiev Co-operative Institute (1923). Later, he switched to the socialist realism style, in which the main works of his group were the Peasant Sanatorium in Odessa (1927–28) and the Kharkiv Chervonozavodskyi Ukrainian Drama Theater (1933–35).