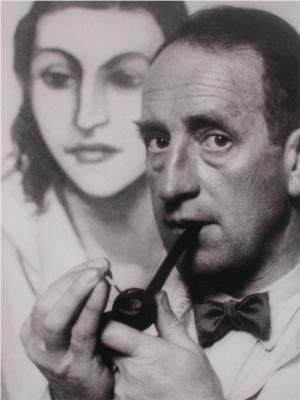 Hermann Max Pechstein (December 31, 1881 – June 29, 1955) was a German expressionist painter and printmaker, and a member of the Die Brücke group.

Pechstein was born in Zwickau, the son of a craftsman who worked in a textile mill. Early contact with the art of Vincent van Gogh stimulated Pechstein's development toward expressionism. After studying art first at the School of Applied Arts and then at the Royal Art Academy in Dresden, Pechstein met Erich Heckel and joined the art group Die Brücke in 1906. He was the only member to have formal art training. Later in Berlin, he helped to found the Neue Sezession and gained recognition for his decorative and colorful paintings that were lent from the ideas of Van Gogh, Matisse, and the Fauves. His paintings eventually became more primitivist, incorporating thick black lines and angular figures.

Beginning in 1933, Pechstein was vilified by the Nazis because of his art. A total of 326 of his paintings were removed from German museums. Sixteen of his works were displayed in the Entartete Kunst (Degenerate Art) exhibition of 1937. During this time, Pechstein went into seclusion in rural Pomerania.

He was a prolific printmaker, producing 421 lithographs, 315 woodcuts and linocuts, and 165 intaglio prints, mostly etchings.

Pechstein was a professor at the Berlin Academy for ten years before his dismissal by the Nazis in 1933. He was reinstated in 1945, and subsequently won numerous titles and awards for his work.

He died in West Berlin. He is buried on the Evangelischer Friedhof Alt-Schmargendorf in Berlin.