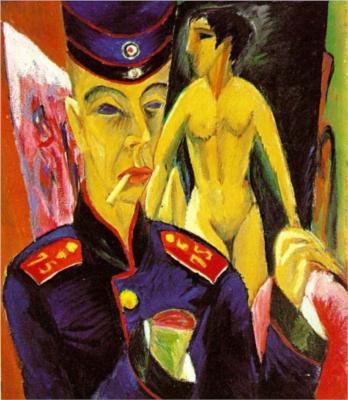 Self Portrait as a Soldier - Ernst Ludwig Kirchner

Ernst Ludwig Kirchner (6 May 1880 – 15 June 1938) was a German expressionist painter and printmaker and one of the founders of the artists group Die Brücke or "The Bridge", a key group leading to the foundation of Expressionism in 20th-century art. He volunteered for army service in the First World War, but soon suffered a breakdown and was discharged. In 1933, his work was branded as "degenerate" by the Nazis and in 1937, over 600 of his works were sold or destroyed. In 1938, he committed suicide by gunshot.

Ernst Ludwig Kirchner was born in Aschaffenburg, Bavaria. His parents were of Prussian descent and his mother was a descendant of the Huguenots, a fact to which Kirchner often referred. As Kirchner's father searched for a job, the family moved frequently and Kirchner attended schools in Frankfurt and Perlen until his father earned the position of Professor of Paper Sciences at the College of technology in Chemnitz, where Kirchner attended secondary school. Although Kirchner's parents encouraged his artistic career they also wanted him to complete his formal education so in 1901, he began studying architecture at the Königliche Technische Hochschule (royal technical university) of Dresden. The institution provided a wide range of studies in addition to architecture, such as freehand drawing, perspective drawing and the historical study of art. While in attendance, he became close friends with Fritz Bleyl, whom Kirchner met during the first term. They discussed art together and also studied nature, having a radical outlook in common. Kirchner continued studies in Munich 1903–1904, returning to Dresden in 1905 to complete his degree.

In 1905, Kirchner, along with Bleyl and two other architecture students, Karl Schmidt-Rottluff and Erich Heckel, founded the artists group Die Brücke ("The Bridge"). From then on, he committed himself to art. The group aimed to eschew the prevalent traditional academic style and find a new mode of artistic expression, which would form a bridge (hence the name) between the past and the present. They responded both to past artists such as Albrecht Dürer, Matthias Grünewald and Lucas Cranach the Elder, as well as contemporary international avant-garde movements. As part of the affirmation of their national heritage, they revived older media, particularly woodcut prints.

Their group was one of the seminal ones which in due course had a major impact on the evolution of modern art in the 20th century and created the style of Expressionism. The group met initially in Kirchner's first studio, which had previously been a butcher's shop. Bleyl described it as "that of a real bohemian, full of paintings lying all over the place, drawings, books and artist’s materials — much more like an artist’s romantic lodgings than the home of a well-organised architecture student".

Kirchner's studio became a venue which overthrew social conventions to allow casual love-making and frequent nudity. Group life-drawing sessions took place using models from the social circle, rather than professionals, and choosing quarter-hour poses to encourage spontaneity. Bleyl described one such model, Isabella, a fifteen-year-old girl from the neighbourhood, as "a very lively, beautifully built, joyous individual, without any deformation caused by the silly fashion of the corset and completely suitable to our artistic demands, especially in the blossoming condition of her girlish buds."