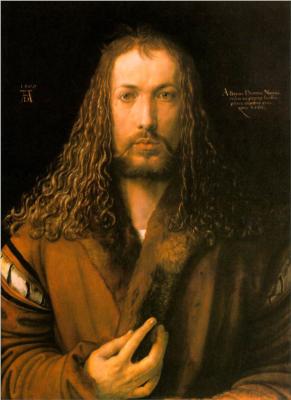 Self-Portrait at the Age of Twenty Eight - Albrecht Durer

Albrecht Dürer was one of the leading figures of the Northern Renaissance, who created masterpieces in the mediums of drawing, paintings and printmaking. He also made significant contributions to the exchange of knowledge between the Italian and the Northern Renaissance, and established important relations with representatives of Italian Renaissance. Throughout his life, Dürer made two trips to Italy, where he acquired vital knowledge of proportions, anatomy and perspective. He then dedicated extensive portions of his life to spreading this theoretical knowledge, making it available to younger artists in Four Books of Human Proportion (publ. c. 1528) and Instruction in Measurement (1525).

Dürer was born in 1471 in Nuremberg. His father was a successful goldsmith, Albrecht Dürer the Elder, for whom he began to apprentice at the age of thirteen. Early on, Dürer began to show an inclination toward painting, and in 1486 he was sent to apprentice at the workshop of a local painter, Michael Wolgemut. In 1494, following his father’s arrangement, he married Agnes Frey, and shortly after left for his first trip to Italy. The trip was integral to his artistic development, and upon his return to Nuremberg in 1495, he opened his own workshop, where he principally focused on printmaking - engravings and woodcuts. In this period, Dürer concentrated on building his name and reputation. His aspirations and ambitions come across in his self-portraits from the period, namely in Self Portrait (1498) and Self Portrait at the Age of Twenty Eight (1500).

In 1505 Dürer took his second trip to Venice, where he created important artworks such as Feast of the Rosary (1506), an altarpiece commissioned by a colony of German merchants in Venice. Although the panel was influenced by Venetian color and design, the subject is undeniably German. The iconography centers on Rosary devotion, that originated in Cologne in the 1470s and spread throughout Germany and Holland. In addition, the artist features a German alpine landscape in the background. After his return to Nuremberg in the spring of 1507, Dürer created some of his most celebrated paintings: Adam and Eve (1507) and The Martyrdom of Ten Thousand (1508).

In the following years, Dürer once again turned his attention to printmaking, namely woodcuts and engravings. He understood printmaking as an art in its own right and created some of his best known works in this medium. In the years 1513 and 1514, he completed the most significant engraving of his career, also known as his ‘master engravings’: Knight, Death and the Devil (1513), St. Jerome in his Study (1514) and Melencolia I (1514). The three prints are often linked together even though they do not strictly share a common theme or meaning. However, these certainly represent the pinnacle of Dürer’s technical skill in his handling of light and shade and mastery of the engraved line.

Dürer died prematurely in 1528 at the age of fifty seven. At the time of his death, he was considered one of the famous artists of his time, only surpassed by Michelangelo and Raphael.

Albrecht Dürer (/ˈdʊərər, ˈdjʊərər/; German: [ˈalbʁɛçt ˈdyːʁɐ]; 21 May 1471 – 6 April 1528) was a painter, printmaker, and theorist of the German Renaissance. Born in Nuremberg, Dürer established his reputation and influence across Europe when he was still in his twenties due to his high-quality woodcut prints. He was in communication with the major Italian artists of his time, including Raphael, Giovanni Bellini and Leonardo da Vinci, and from 1512 he was patronized by emperor Maximilian I. Dürer is commemorated by both the Lutheran and Episcopal Churches.

Dürer's vast body of work includes engravings, his preferred technique in his later prints, altarpieces, portraits and self-portraits, watercolours and books. The woodcuts, such as the Apocalypse series (1498), are more Gothic than the rest of his work. His well-known engravings include the Knight, Death, and the Devil (1513), Saint Jerome in his Study (1514) and Melencolia I (1514), which has been the subject of extensive analysis and interpretation. His watercolours also mark him as one of the first European landscape artists, while his ambitious woodcuts revolutionized the potential of that medium.

Dürer's introduction of classical motifs into Northern art, through his knowledge of Italian artists and German humanists, has secured his reputation as one of the most important figures of the Northern Renaissance. This is reinforced by his theoretical treatises, which involve principles of mathematics, perspective, and ideal proportions.

Dürer was born on 21 May 1471, third child and second son of his parents, who had at least fourteen and possibly as many as eighteen children. His father, Albrecht Dürer the Elder (originally Albrecht Ajtósi), was a successful goldsmith who in 1455 had moved to Nuremberg from Ajtós (hu; fr), near Gyula in Hungary. One of Albrecht's brothers, Hans Dürer, was also a painter and trained under him. Another of Albrecht's brothers, Endres Dürer, took over their father's business and was a master goldsmith. The German name "Dürer" is a translation from the Hungarian, "Ajtósi". Initially, it was "Türer", meaning doormaker, which is "ajtós" in Hungarian (from "ajtó", meaning door). A door is featured in the coat-of-arms the family acquired. Albrecht Dürer the Younger later changed "Türer", his father's diction of the family's surname, to "Dürer", to adapt to the local Nuremberg dialect. Albrecht Dürer the Elder married Barbara Holper, the daughter of his master when he himself became a master in 1467.

Dürer's godfather was Anton Koberger, who left goldsmithing to become a printer and publisher in the year of Dürer's birth and quickly became the most successful publisher in Germany, eventually owning twenty-four printing-presses and having many offices in Germany and abroad. Koberger's most famous publication was the Nuremberg Chronicle, published in 1493 in German and Latin editions. It contained an unprecedented 1,809 woodcut illustrations (albeit with many repeated uses of the same block) by the Wolgemut workshop. Dürer may have worked on some of these, as the work on the project began while he was with Wolgemut.

Because Dürer left autobiographical writings and became very famous by his mid-twenties, his life is well documented by several sources. After a few years of school, Dürer started to learn the basics of goldsmithing and drawing from his father. Though his father wanted him to continue his training as a goldsmith, he showed such a precocious talent in drawing that he started as an apprentice to Michael Wolgemut at the age of fifteen in 1486. A self-portrait, a drawing in silverpoint, is dated 1484 (Albertina, Vienna) "when I was a child", as his later inscription says. Wolgemut was the leading artist in Nuremberg at the time, with a large workshop producing a variety of works of art, in particular woodcuts for books. Nuremberg was then an important and prosperous city, a centre for publishing and many luxury trades. It had strong links with Italy, especially Venice, a relatively short distance across the Alps.