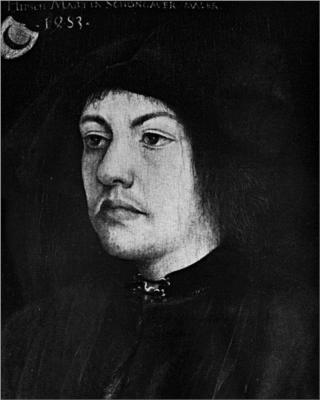 Martin Schongauer (c. 1445, Colmar – 2 February 1491, Breisach), also known as Martin Schön ("Martin beautiful") or Hübsch Martin ("pretty Martin") by his contemporaries, was an Alsatian engraver and painter. He was the most important printmaker north of the Alps before Albrecht Dürer.

Schongauer was born in about 1440 in Colmar, Alsace, probably the third of the four sons of Caspar Schongauer, a goldsmith from Augsburg who taught his son the art of engraving. Colmar is now in France but was then part of the Holy Roman Empire. He may well have been trained by Master E. S. The art historian A. Hyatt Mayor saw both their individual styles in different parts of a single engraving, and all the works with Schongauer's M†S monogram show a fully developed style. Schongauer established at Colmar a very important school of engraving, out of which grew the "Little Masters" of the succeeding generation, and a large group of Nuremberg artists.

As a painter, Schongauer was a follower, through the teachings of his probable master Caspar Isenmann, of the Flemish artist Rogier van der Weyden, and his rare existing pictures closely resemble, both in splendour of color and exquisite minuteness of execution, the best works of his contemporaries in Flanders.

Only a few of his paintings survive, the most notable of them being the Madonna in the Rose Garden, painted for St Martin's Church, Colmar. The Musée d´Unterlinden in Colmar possesses eleven panels by him or his workshop, and a small panel of David with Goliath's Head in Munich is attributed to him. The miniature painting of the Death of the Virgin in the National Gallery, London is probably the work of a pupil.

The main work of Schongauer's life was the production of a large number of beautiful engravings, which were largely sold, not only in Germany, but also in Italy and even in England and Spain. Vasari says that Michelangelo copied one of his engravings, in the Trial of Saint Anthony. His style shows no trace of Italian influence, but a very clear and organised Gothic.

His subjects are mainly religious, but include comic scenes of ordinary life such as the Peasant family going to market or the Two apprentices fighting. One hundred and sixteen engravings are generally recognised as by his hand, and since several are only known from a single impression, there were probably others that are now lost. Many of his pupils' plates as well as his own are signed, M†S, as are many copies probably by artists with no connection to him.

Among the most renowned of Schongauer's engravings are the series of the Passion and the Death and Coronation of the Virgin, and the series of the Wise and Foolish Virgins. All are remarkable for their miniature-like treatment, their brilliant touch, and their chromatic force. Some, such as the Death of the Virgin and the Adoration of the Magi are richly-filled compositions of many figures, treated with much largeness of style in spite of their minute scale.