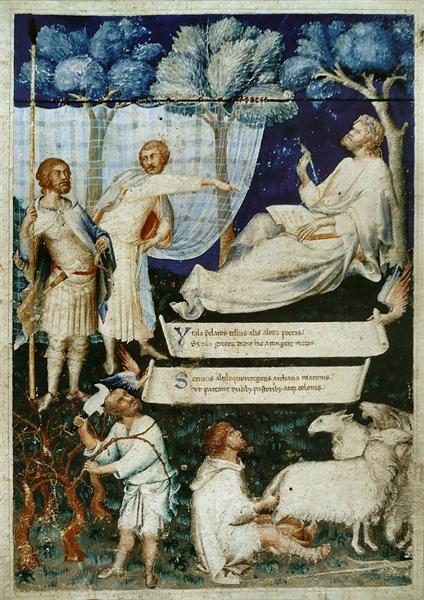 Gothic art was a style of medieval art that developed in Northern France out of Romanesque art in the 12th century AD, led by the concurrent development of Gothic architecture. It spread to all of Western Europe, and much of Southern and Central Europe, never quite effacing more classical styles in Italy. In the late 14th century, the sophisticated court style of International Gothic developed, which continued to evolve until the late 15th century. In many areas, especially Germany, Late Gothic art continued well into the 16th century, before being subsumed into Renaissance art. Primary media in the Gothic period included sculpture, panel painting, stained glass, fresco and illuminated manuscripts. The easily recognizable shifts in architecture from Romanesque to Gothic, and Gothic to Renaissance styles, are typically used to define the periods in art in all media, although in many ways figurative art developed at a different pace.

The earliest Gothic art was monumental sculpture, on the walls of Cathedrals and abbeys. Christian art was often typological in nature (see Medieval allegory), showing the stories of the New Testament and the Old Testament side by side. Saints' lives were often depicted. Images of the Virgin Mary changed from the Byzantine iconic form to a more human and affectionate mother, cuddling her infant, swaying from her hip, and showing the refined manners of a well-born aristocratic courtly lady.

Secular art came into its own during this period with the rise of cities, foundation of universities, increase in trade, the establishment of a money-based economy and the creation of a bourgeois class who could afford to patronize the arts and commission works resulting in a proliferation of paintings and illuminated manuscripts. Increased literacy and a growing body of secular vernacular literature encouraged the representation of secular themes in art. With the growth of cities, trade guilds were formed and artists were often required to be members of a painters' guild—as a result, because of better record keeping, more artists are known to us by name in this period than any previous; some artists were even so bold as to sign their names.

Gothic art emerged in Île-de-France, France, in the early 12th century at the Abbey Church of St Denis built by Abbot Suger. The style rapidly spread beyond its origins in architecture to sculpture, both monumental and personal in size, textile art, and painting, which took a variety of forms, including fresco, stained glass, the illuminated manuscript, and panel painting. Monastic orders, especially the Cistercians and the Carthusians, were important builders who disseminated the style and developed distinctive variants of it across Europe. Regional variations of architecture remained important, even when, by the late 14th century, a coherent universal style known as International Gothic had evolved, which continued until the late 15th century, and beyond in many areas.

Although there was far more secular Gothic art than is often thought today, as generally the survival rate of religious art has been better than for secular equivalents, a large proportion of the art produced in the period was religious, whether commissioned by the church or by the laity. Gothic art was often typological in nature, reflecting a belief that the events of the Old Testament pre-figured those of the New, and that this was indeed their main significance. Old and New Testament scenes were shown side by side in works like the Speculum Humanae Salvationis, and the decoration of churches. The Gothic period coincided with a great resurgence in Marian devotion, in which the visual arts played a major part. Images of the Virgin Mary developed from the Byzantine hieratic types, through the Coronation of the Virgin, to more human and initimate types, and cycles of the Life of the Virgin were very popular. Artists like Giotto, Fra Angelico and Pietro Lorenzetti in Italy, and Early Netherlandish painting, brought realism and a more natural humanity to art. Western artists, and their patrons, became much more confident in innovative iconography, and much more originality is seen, although copied formulae were still used by most artists.