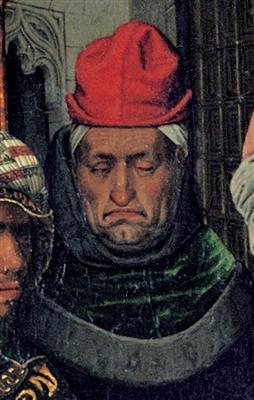 According to the inscription "OPUS.BARTOLOMEI.VERMEIO.CORDUBENSIS' on the frame of his most famous painting, Canon Lluís Desplà's Pietà, Bermejo, whose real name was Bartolomé de Cárdenas, was born in Córdoba. This theory has been recently cast into doubt, for there is no documentary or stylistic evidence of his presence there.

Although it is unclear where Bermejo received his training, his complete mastery of the oil glaze technique suggests direct contact with 15th century Flemish painting, which he was able to adapt perfectly to the demands of Spanish altarpieces of the period: large-scale retables with many panels. Though his documented career spans over thirty years, he was peripatetic: he never settled in one place for more than a decade. Also, in a period and place where painting was a business, and work was generally negotiated by contract, there is both direct and indirect evidence that he was professionally unreliable, though apparently his outstanding talent made patrons willing to take the risk. At least three major altarpieces that he undertook, the high altar retables of Santo Domingo de Silos in Daroca and Santa Anna in Barcelona, and the triptych of the Virgin of Montserrat in Valencia, were left incomplete for others to finish.

Bermejo’s professional career appears to have begun in Valencia in 1468, where he documented in a first payment for an altarpiece dedicated to Saint Michael for the Parish Church in Tous, near Valencia (the central panel of which is currently housed in the National Gallery, London).[1] The patron was a local nobleman, Antonio Juan, to whom Tous belonged. No documentation of other work from that period seems to have survived, but there is evidence that he returned there for a short time around 1485, when he painted the signed central panel of the Triptych of the Virgin of Montserrat, ordered by an Italian merchant who was living there, Francesco della Chiesa, for the Cathedral of Acqui Terme, his hometown. The wings were carried out by the Valencian painter Rodrigo de Osona, though there is some evidence that Bermejo was responsible for at least part of the underdrawing and some of the painting.

By 1474, Bermejo had moved on to the Aragonese town of Daroca, where he signed a contract to paint the high altarpiece for the church of Santo Domingo de Silos. This contract is full of guarantees to keep Bermejo working on the altarpiece, including the threat of excommunication if he didn’t complete it, suggesting his reputation for unreliability.

Exactly how long Bermejo actually resided in Daroca is not clear; but he did complete at least one other altarpiece there, dedicated to Saint Engracia (now divided among various locations), and a Dead Christ in his Tomb for a local merchant, the Converso Juan de Loperuelo (Museu del Castell de Perelada). Though Bermejo was probably not a converso himself, he did marry one: the Daroca widow Gracia de Palaciano.